'I had the intent to defend myself’: Man detained after driving through crowd says he meant no harm

No charges for driver as police continue to investigate 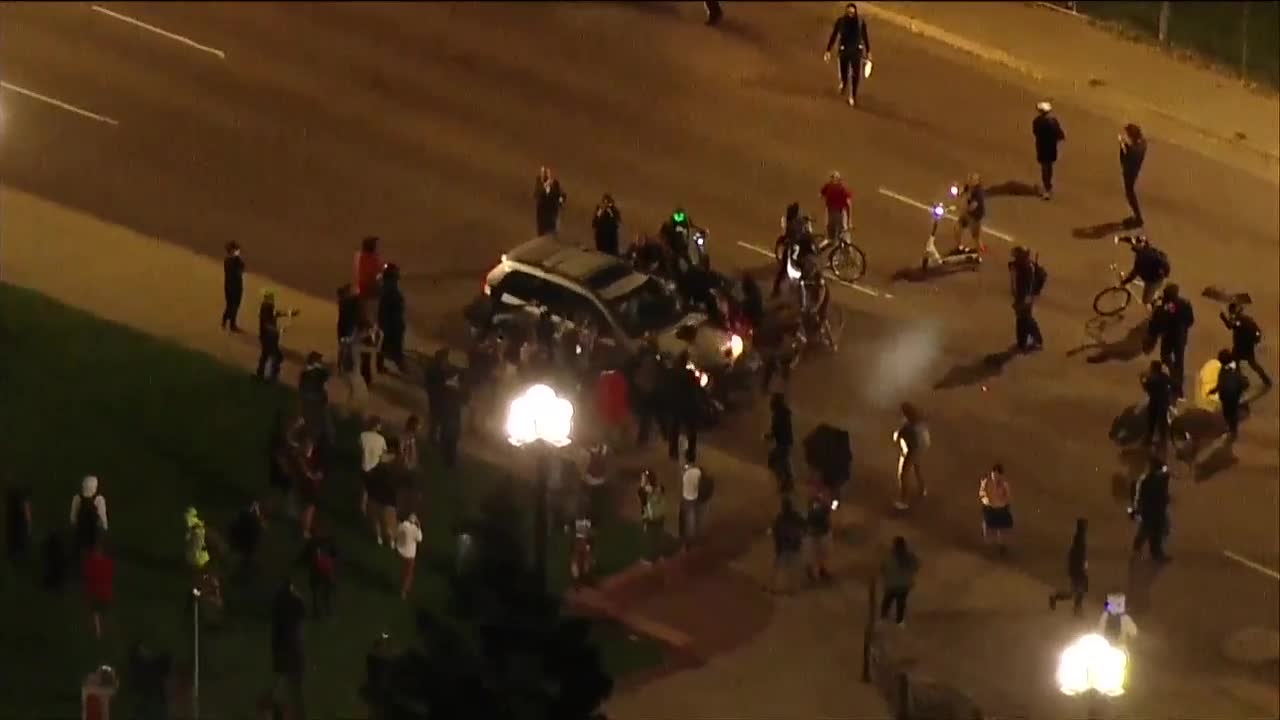 DENVER – The man who was detained after driving his car through a crowd of protesters rallying for Breonna Taylor says he had no intention of hurting anybody and was only defending himself after his vehicle was surrounded by demonstrators outside the Colorado State Capitol building in Denver Wednesday night.

“I was driving to go pick up a client and I saw a commotion, I saw police lights at 14th and Lincoln and so when I was there, at the Capitol, I wasn’t really looking left, I was looking right to see the accident and by the time I turned, I started getting surrounded by people,” said Jonathan Benson, who claimed demonstrators yelled, kicked and even used a hammer on his windshield as they tried to get him to leave the area.

Video from AIRTRACKER7, as well as from reporters on the ground, showed the small crowd of protesters surrounding Benson’s vehicle and blocking his way. The driver, who was going north on Lincoln Street, had slowed down as he reached the protesters in the area, eventually pulling up and parking his vehicle in front of the Capitol building.

Here is when the driver first pulled up to the protesters tonight in Denver, you can hear people urging him to turn around. During the next few minutes, I saw the driver shaking his head in apparent disbelief and using his cell phone, perhaps to take pictures. pic.twitter.com/TSAzfipida

Benson said he didn’t know at that moment if one of the protesters was trying to get into his vehicle, adding the whole situation was “just chaos.”

“What we can see from the video is that the individual in that car began to be threatened,” said Denver Police Department Division Chief Ron Thomas. “I think that the vehicle was being kicked and then that individual kind of worked their way out of that situation.”

The back-and-forth lasted for several minutes and, at times, protesters could be seen from AIRTRACKER7 banging on the hood of the car and using at least one bicycle to create a barrier between them and the vehicle before the driver accelerated and drove his vehicle through the small crowd.

“I had the intent to defend myself, that’s it,” Benson said. “I had no intention of hurting anybody and I’m glad it was a bike that I ran over because I thought I ran somebody over, so I was glad that nobody got hurt.”

For Apryl Alexander, an associate professor with the University of Denver, Benson had other options that would have prevented the incident from ever taking place.

“It shouldn’t be a free for all. There were other cars trying to drive that day and they stopped. There are people with signs, there are people honking in support and so why would a person want to try to drive through?” she said.

Benson was detained seconds later by police about a block away from where the incident occurred and was released after providing officers with a statement and his contact information.

Thomas said no charges have been filed against Benson as police are still investigating exactly how the events unfolded, but he did give drivers some advice should they end up in a similar situation.

“In the event someone is blocking you or you are surrounded by people, our advice is to stay in the car, lock your doors, do not engage with demonstrators,” Thomas said, adding drivers should back away, or turn around. If that’s not possible, they should call 911.

While no arrests in connection to that incident have taken place, Denver Police Department spokesman Doug Schepman said three people were arrested following the protest: Allan Cutler, 52, was arrested for obstruction of a street. Joseph Miller, 33, and Coy Jones, 27, were both being held for investigation of prohibited large capacity magazines.

During a virtual news conference on the city’s response to COVID-19 earlier Thursday, Denver Mayor Michael Hancock was asked about the incident from the night before and what drivers should do if they encounter protesters.

“I don’t know what you recommend to people but if you get a sense something is going on, avoid it,” Hancock said, adding that admonishment “goes both ways.”

“We have to make allowances for drivers who might accidentally find themselves there. We gotta not assume every driver is listening to radio or aware protest is there,” he said, further suggesting protesters work with drivers by creating a safe path for them to travel on the street.

The incident between the driver and the protesters happened toward the end of an otherwise peaceful night, after hundreds rallied and marched in downtown Denver over the lack of charges against the police officers involved in Breonna Taylor’s death in Louisville, Ky.

Wednesday’s incident marks the third time this year a driver has encountered a crowd of protesters calling for racial justice.

On May 28, the driver of a black SUV hit a protester after George Floyd demonstrators had blocked off the intersection of Colfax Avenue and Broadway. About two months later, on July 25, the driver of a Jeep drove through I-225 in Aurora while a crowd of Elijah McClain protesters marched along the highway. The driver of that Jeep is not facing charges at this time.

This article was written by Óscar Contreras and Ivan Rodriguez for KMGH.