How the coronavirus hits some people in Colorado harder than others 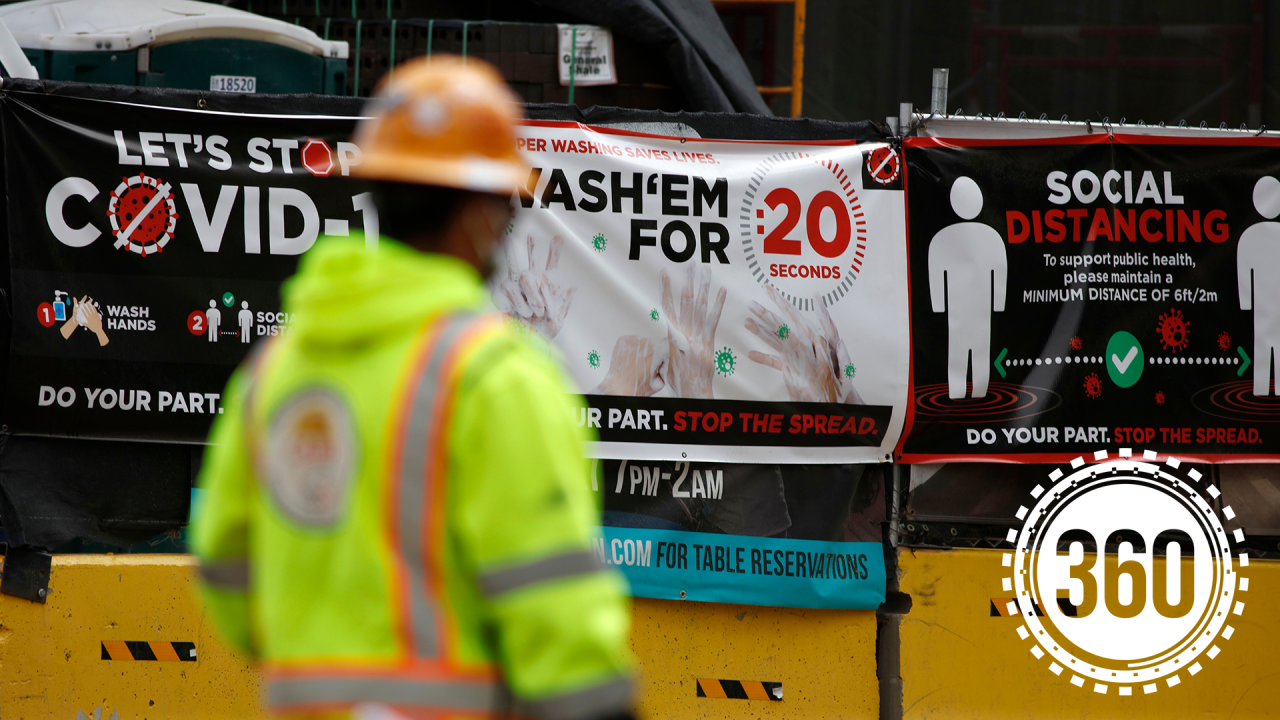 (AP Photo/David Zalubowski/Illustration by Denver7)
A construction worker heads back to a building site past signs about the new coronavirus as the city&#39;s stay-at-home order to check the spread of the new coronavirus expired Saturday, May 9, 2020, in Denver. (AP Photo/David Zalubowski/Illustration by Denver7) 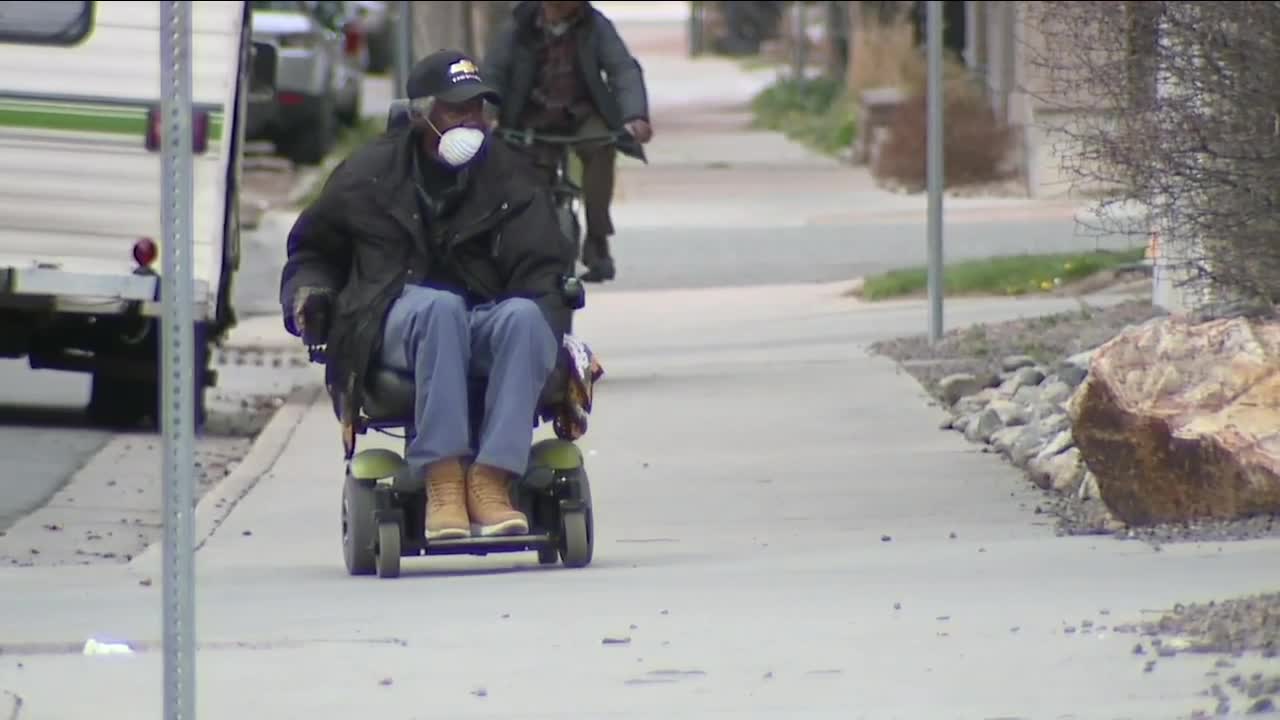 Editor's Note: Denver7 360 stories explore multiple sides of the topics that matter most to Coloradans, bringing in different perspectives so you can make up your own mind about the issues. To comment on this or other 360 stories, email us at 360@TheDenverChannel.com . See more 360 stories here . This story airs Monday at 10 p.m.

Across the country and in Colorado, the COVID-19 pandemic is having widespread effects. Just about everyone in the state is feeling the impacts the virus is having on their health, finances or lifestyles.

But some groups say they are experiencing disproportionate impacts from the pandemic – particularly people of color.

Denver7 went 360 to look at multiple perspectives when it comes to the unequal impacts the virus is having on some people.

From early on, federal and state health officials have acknowledged that the novel coronavirus is having disproportionate impacts on the health on minorities, particularly African Americans.

“People of color experience both more likely exposure to COVID-19 and increased complications from it,” U.S. Surgeon General Jerome Adams said in an April 10 press conference. “But let me be crystal clear. We don’t think people of color are more biologically predisposed to get COVID-19. There’s nothing inherently wrong with them. But they are more socially predisposed to coronavirus exposure.”

Adams called the trend alarming but said it is not surprising, pointing to the fact that many African Americans like him have asthma and rely on inhalers. They’re also more likely to develop high blood pressure at a younger age.

“The chronic burden of medical ills is likely to make people of color less resilient to the ravage of COVID-19,” Adams said.

Dr. Anthony Fauci says minorities are more likely to face health conditions like diabetes, obesity, hypertension and more – conditions which can make the novel coronavirus worse and land patients in the intensive care unit of hospitals.

“Health disparities have always existed for the African-American community. But here again with the crisis, how it is shining a bright light on how unacceptable that is because yet again when you have a situation like the coronavirus, they are suffering disproportionately,” Dr. Fauci said in an April 7 press conference.

Jack Strauss, the Miller Chair of Applied Economics at the University of Denver Daniels School of Business, says one of the social predispositions that minorities face is the fact that they are more likely to live in densely populated areas, meaning there is more potential for exposure.

People of color are more likely to rely on mass transit and work in a job that is considered an essential service. In fact, Adams said only one-in-five African Americans and one-in-six Hispanic Americans has a job that lets them work from home.

People working lower-income jobs are also less likely to have good health care coverage and more likely to have a poor diet, which can lead to health complications.

“For a variety of reasons, unfortunately, COVID-19 has hurt minorities more than the rest of America,” Strauss said.

Even after the stay-at-home order ended and the safer at home period began, small businesses have been feeling the financial effects of the COVID-19 pandemic.

While companies like Amazon and Walmart are surviving the pandemic, many other businesses have had to close shop and lay off employees.

“Their profit margins are very small and so if they’re not working for several weeks, they can go underwater,” Strauss said.

The federal government had offered some help in the form of the Paycheck Protection Program run through the Small Business Administration.

Within two weeks, however, the $349 billion allocated for small business relief ran out. Public companies like Potbelly and Shake Shack received tens of millions of dollars in help while many truly small businesses weren’t able to receive financial aid before the money ran out.

“The people that got that money were those who were richer because they were better connected to the banking system in general,” Strauss said.

Both Shake Shack and Potbelly announced that they would return the $10 million they received from the loan program. Several other companies, however, have decided to keep the loans.

On an individual level, the novel coronavirus is also having a disproportionate impact financially.

Chuck Collins, the director of the program on inequality for the Institute for Policy Studies, says the wealth gap in the nation has widened substantially over recent years and is widening even more in the midst of the pandemic.

He believes part of the issue stems back to the Great Recession and the fact that many Americans have not fully recovered from the economic downturn financially.

“Going into this pandemic, 80 percent of U.S. households were still experiencing kind of an economic hangover from the Great Recession,” Collins said.

The pandemic caused entire states to issue stay-at-home orders, which closed businesses and left millions without work. At first, Collins said, the closures were hurting big companies, but now their profits are recovering.

“Some 22 million Americans have lost their jobs while the combined wealth of U.S. billionaires has increased 10 percent over the past year,” Collins said.

He says he is worried that if steps aren’t taken to help close the wealth gap, the U.S. could exit the pandemic a far more unequal society than it was going into it.

Some steps he would like to see taken are taking health care insurance coverage away from being linked to people's jobs, the federal government passing a bill for paid sick leave, raising the minimum wage and raising taxes on the billionaire class, among other things.

“Some people just can’t be in their yachts and then everybody else is going to be paddling in their little canoes or not have a boat at all,” he said.

Strauss, meanwhile, believes it’s in everyone’s benefit to help the people who are struggling financially.

“A depressed America hurts everyone. If we don’t lift up the lower and middle income people, everyone loses in the U.S.,” he said.

The COVID-19 pandemic is also having a disproportionate effect on some students. Across Colorado, students have moved to remote learning in an attempt to contain the spread of the novel coronavirus.

Kevin Welner, a professor of policy and law at the University of Colorado at Boulder’s School of Education, says middle- and lower-income students are at more of a disadvantage during this remote learning period.

“When we think about opportunity gaps and achievement gaps, it’s the inequalities outside of the schools that are primarily driving those gaps,” Welner said. “When children are not in school, they don’t have the opportunities the school provides to mitigate some of those gaps.”

One of the causes for this disparity is a student’s access to the internet and technology.

Students from lower- and middle-income families are also more likely to feel the financial distress of their families with things like food insecurity, which can contribute to their mental and emotional stress and detract from their learning.

“You have tremendously unequal situations in terms of what students need, what sorts of resources they can draw on in their homes and in their communities.,” Welner said.

However, Welner believes a more important hurdle for some students is the fact that their parents are working and aren’t able to help.

“If that child also has a parent at home who is there to work with a child and who has the skill set that they could help the child with the math or the science or whatever it is, that child has an additional advantage,” Welner said.

This is especially true for essential employees who don’t have the ability to work from home. Students with specialized needs are also at a particular disadvantage since they require more one-on-one attention.

When students are allowed to return to class, Welner says there are a couple of things adults can do to help. First, he believes adults need to be understanding of the fact that the novel coronavirus did have a negative impact on education.

“I think we need to be forgiving our children and changing our expectations. There’s no God-given standard that says at the end of the fourth-grade year you’re supposed to know X, Y and Z,” he said.

He believes it’s important for adults to see children as people who are going through a crisis as well and who will need a little help getting back on their feet.

Second, when classes do resume, it’s important for lawmakers to support schools financially, even while states are dealing with budget shortfalls, he said.

Denise Maes, the public policy director for the American Civil Liberties Union of Colorado, hopes that this pandemic will serve as a lesson to everyone of the disparities that exist at the federal and state levels.

“If nothing else, this pandemic should really cause us to not only acknowledge the privilege that many of us have, but more so to really think about those that lack that sort of privilege and have to get up every day and to work in an environment that is really potentially unsafe,” Maes said.

She says the disparities in the community existed well before COVID-19, but that the pandemic is shining a light on them and bringing them to the forefront of conversations. Before anything can be done to address the challenges some communities are facing, however, she says people first need to recognize that they exist.

“I think there needs to be an explicit acknowledgment that it’s in fact happening and that it is in fact the truth – that it’s a fact. I think without acknowledging that, then there’s really little effort that could be put to address it,” she said.

Across the country and within Colorado, millions of people are feeling the devastating effects of the COVID-19 pandemic, from its health impacts to the financial toll. It will be up to state leaders and health officials to figure out how to address the disproportionate effects it is having on some communities.