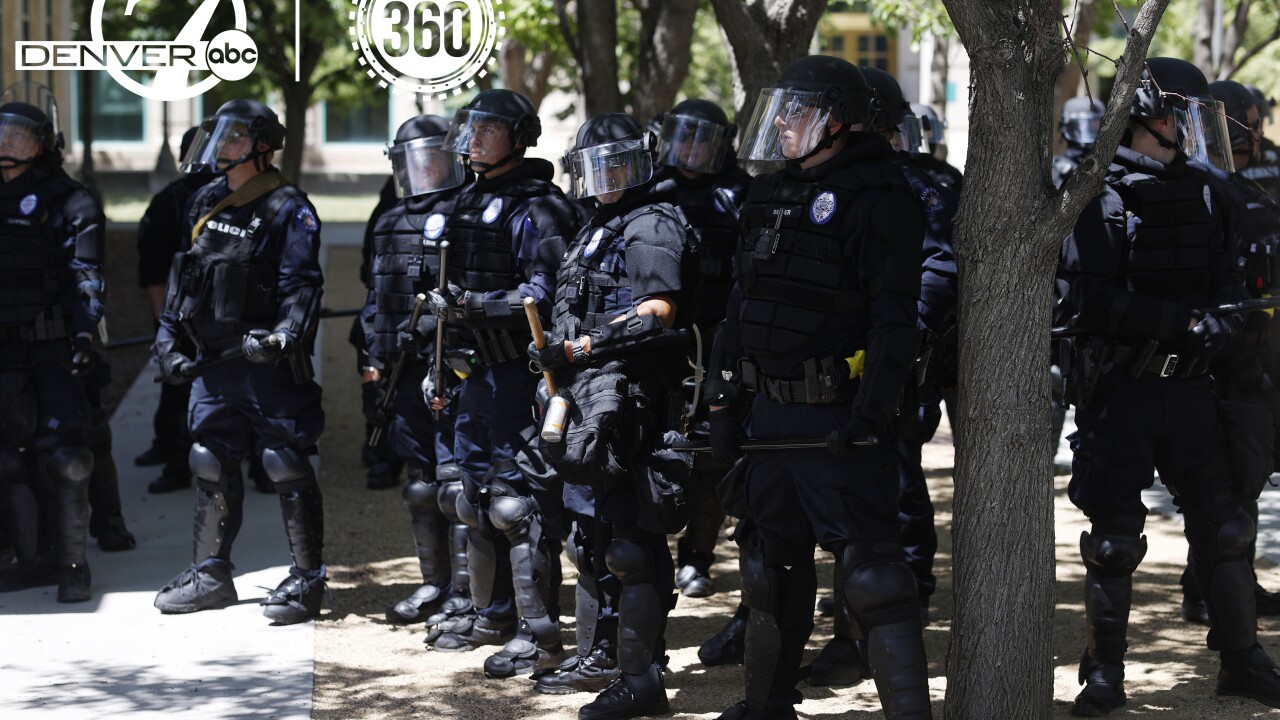 Copyright 2020 The Associated Press. All rights reserved.
David Zalubowski/AP
Officers in riot gear guard the police department Saturday, June 27, 2020, in Aurora, Colo., during a rally and march over the death of Elijah McClain. McClain was a 23-year-old Black man put into a chokehold by police last year. He suffered cardiac arrest on the way to the hospital and was later declared brain dead and removed from life support. (AP Photo/David Zalubowski) 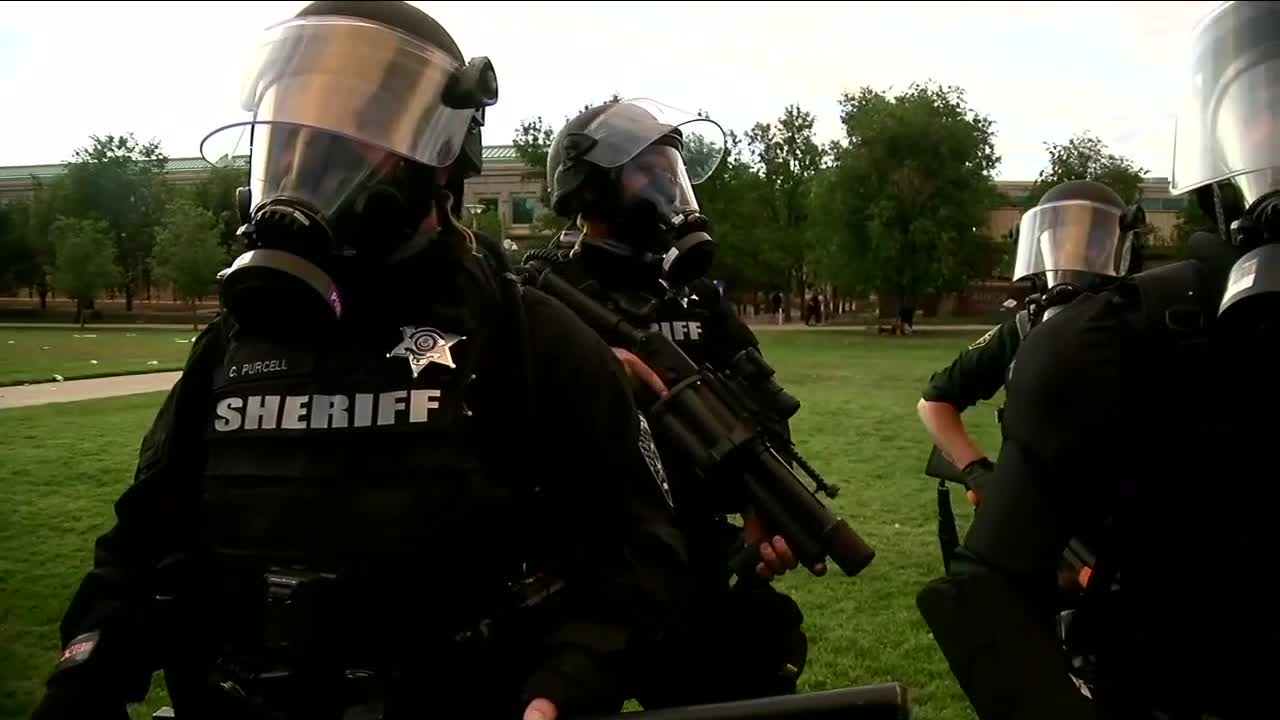 AURORA, Colo. -- An Aurora City Council committee is considering changes to the equipment its police department is allowed to use in the wake of calls for reform.

The first proposal would prohibit the police department from using the U.S. Department of Defense’s 1033 grant program to procure certain military-grade equipment. The list of banned items would include armored vehicles, 40-mm firearms, 5.56-mm firearms, 7.62-mm firearms, grenade launchers and camouflage uniforms, among other things.

“It would restrict the department from procuring what I call, 'weapons of war,'” said Aurora City Councilman Juan Marcano, who came up with the proposal.

Along with no longer being allowed to obtain this equipment, the proposal also calls for any current equipment the department has to be done away with.

“I’ve been really concerned with the militarization of our police for a long time,” Marcano said.

Marcano argued this equipment was originally meant to help with rare, serious scenarios like active shooter situations but that, over the years, Aurora police have started to deploy it more frequently for things like drug offenses.

“The tools that I’ve been procured through this program have been used to basically fight the war on drugs which is an abject failure,” he said.

Other items given out through the program to help with natural disasters, for example, and other response scenarios would not be banned, but they would require the city manager’s approval.

Mayor Mike Coffman, who has a combined 21 years of experience in the military, disagrees with the proposal and says there was not enough of a stake holding process involving law enforcement.

He insists that there are applicable civilian uses for things like the mine resistant, ambush protective vehicles (also known as MRAPs).

Meanwhile, Councilman-At-Large Curtis Gardner pointed out that Aurora used its MRAP during the bomb cyclone last year in order to rescue stranded motorists.

During the committee hearing, some city council members questioned why the city manager should be put in charge of certain approvals. Others pointed out that if the goal is to demilitarize the police, then defensive gear should be added to the list as well.

Unlike other law enforcement agencies around Colorado, Aurora Police have received a limited number of items from the 1033 program, including an MRAP, 126 5.56-mm rifles, 74 shields, 25 7.62-mm rifles and 12 units of individual equipment, according to the Marshall Project.

The committee decided to table the discussions on the first proposal until more work can be done on the language and drafting of the ordinance.

The second proposal was a step down from the first and proposed that the Aurora City Council approve of all equipment procurement through the 1033 program.

“What I was looking to do is make sure that city council is accountable for the items that we procure under those programs,” said Gardner. “I think it’s important that, as policy makers in the city, we decide, 'do we want these items, or what they are used for?'”

He believes this is a better approach because it is not a blanket ban and allows for a more deliberative process. The committee agreed and decided to move this proposal forward to a study session.

The third proposal was also introduced by Marcano and was a ban on certain chemical agents. The first part of the proposed ban was for the use of tear gas and other chemicals which have a debilitating but non-permanent effect on a person.

The second part of the proposed ban was for the use of fogger spray during a protest or demonstration.

Marcano says these types of chemical agents can affect more than the person they were intended for and can have health impacts.

“This does impact folks outside of the initial target. We don’t know what you might be subjecting people with asthma and, in this era, potentially COVID or other underlying health effects too, that could be exacerbated by exposure to the substance,” Marcano said.

He said the city is not allowed to study the long-term health effects of tear gas on people because it is an ethical violation, but he is convinced there are potential consequences.

In particular, he is concerned about the use of these chemical agents in or around homes and apartment buildings, citing an incident recently at his building.

However, Aurora Police Chief Vanessa Wilson expressed concern with the idea of getting rid of less than lethal force, saying it could have unintended consequences.

Wilson said in the event that a protest gets out of hand or turns to rioting, without the use of chemical agents other force would have to be used that put both the officers and the public in danger.

“It would leave us with having to go in and use force with batons, putting the officers at risk, using a stick to fight someone is going to possibly break bones, those types of injuries and then the Molotov cocktails... I can expect my officers to sit and get set on fire, so lethal force would have to be utilized at that point,” Wilson said.

In general, Wilson said she likes to avoid officers being in close contact with the public during demonstrations but admits there have been incidents where the wrong decision was made, such as the June 27 protest where chemical agents were used on peaceful protesters.

Wilson asked the committee not to limit the tools that they have to protect themselves and said the department is committed to change. She also pointed out that the newly passed police reform law in Colorado lays out when force can and cannot be used during demonstrations.

Gardner agreed, saying Aurora police are still being trained on all of the new reforms.

“I think we do need to allow Senate Bill 217 time to be implemented, to see what the impacts are going to be,” Gardner said.

He said he would prefer a scalpel approach rather than a blanket ban on any equipment and for city council to slow down and really consider potential, unintended consequences of decisions they make.

Mayor Coffman, meanwhile, said he’d like Chief Wilson to be given more time to implement the reforms and establish her role as the police chief.

“What they’re saying now is, 'we don’t really trust her to make these decisions operationally. We’re going take these tools away from her.' I think that they need to give her the chance to redefine this department and be able to use these tools as necessary,” Coffman said.

The chemical agent proposal did move forward, but with big caveats. The committee said they want more comments to be solicited on the idea and for a bigger discussion on appropriate uses instead of an outright ban. They also decided that the proposal should be a resolution instead of an ordinance.