360° Perspective: History of the Incline

MANITOU SPRINGS – It’s one of the, if not the, toughest hikes in the state. An extreme workout that’s challenged even Olympic athletes. 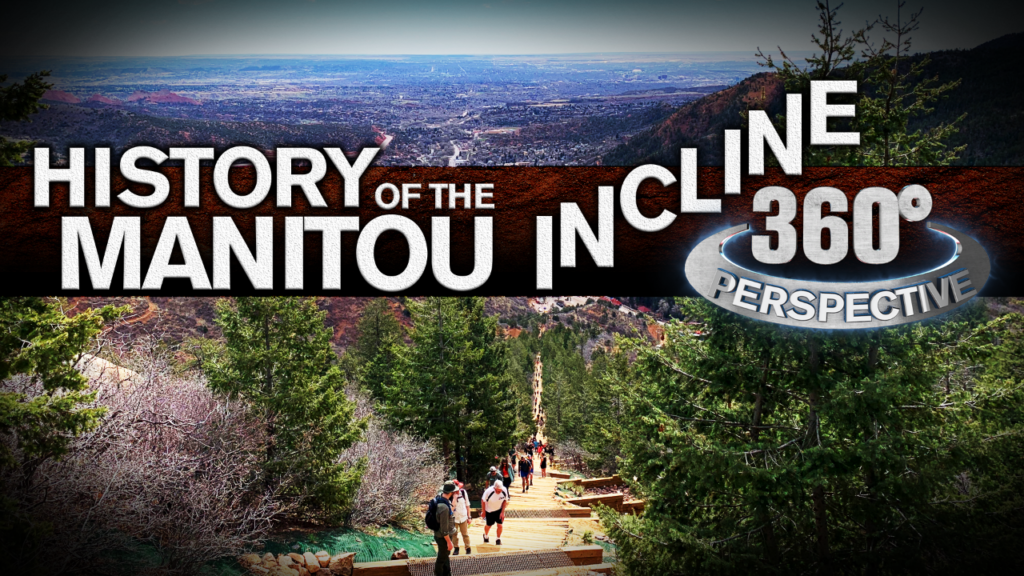 Climbing the Manitou Incline is the equivalent of climbing the Empire State Building, the Eiffel Tower twice, or the Statue of Liberty 6 times.

Hundreds of thousands challenge the trail every year, and as we approach one of the busiest seasons for the climb we are taking you behind the scenes and history of the Manitou Incline in this 360° Perspective.

The Incline hasn’t always been a hiking trail- far from it.

The steep trail was first carved out in 1907 built as a cable tram to haul pipes and other material to the summit for the construction of a hydroelectric power plant.

After that purpose was served the Incline started its new path as a tourist attraction. It was first purchased in the early 1900s by a doctor and was marketed as the “longest and highest incline on the globe.” There was a summit house at the top that burned down in 1914.

In 1923 Spencer Penrose bought the Incline, upgraded the rail cars and built a new summit house in 1958.

The Cog Railway operated it for decades until rockslides and washouts on the mountain became too costly to fix and it was closed down in 1990.

It’s located on the western edge of Manitou Springs at the base of Mount Manitou. It’s split up among three owners. The base belongs to the City of Colorado Springs. The Cog, which is owned by the same company that owns the Broadmoor, owns the middle and largest piece. The top is federal land owned by the U.S. Forest Service.

The end of the Incline connects with Barr Trail, which takes you all the way to the top of Pikes Peak.

In the years after it closed hikers trespassed on private property to make the climb. In order to eliminate crime and better manage the natural reclamation, it was reopened as a public trail in 2013.

That came after years of legal struggles over right-of-way disputes and parking rights. It literally took an Act of Congress, which President Obama signed in 2013, to finally clear the way for the Incline to open as a public trail. Since then millions of dollars worth of renovations have been made to the trail.

As more people continue to move to the Pikes Peak region, and more hikers discover the incline, traffic at the base continues to be an issue for both locals in Manitou and the Cog Railway.

There are several options for parking. The most recommended one is free parking on Manitou Avenue near Memorial Park. Also a free public lot at the intersection with the road called Old Man’s Trail.

From there- the free shuttles run every 20 minutes through Downtown Manitou and up to the base of the incline.

There is also paid parking all throughout Manitou Springs including the streets and public lots.

At the end of Ruxton Avenue, just beyond the Cog, you can park at the Barr Trailhead parking lot. Prices recently doubled to $10 a day, but it’s actually down from what it was more than a year ago when they charged $40 a day.

The Manitou Incline is a point of pride for many in the Pikes Peak region. Businesses benefit from tourism. The intense physical challenge is a draw for world-class athletes training at the Olympic Training Center, our large military population in Colorado Springs, as well as casual hikers looking for an intense workout- or just a big challenge.

It rarely closes except during the Pikes Peak Ascent and Marathon.

It has also been a place to honor American heroes. Firefighters have made the climb in full gear to remember those who died climbing the stairs of the World Trade Center in the 9/11 terror attacks.

If you’re thinking of making your first climb we can’t stress enough how serious it is to know what you’re getting into before you try it. It’s classified as extreme.

El Paso County Search and Rescue called up to help down dozens of hikers each year, many who get simply exhausted from the climb. The rescues take hours and lots of manpower and equipment.

So here are some suggestions from our first responders:

A few things to keep in mind:

If you’d like to learn more about the Incline, the rules or want to help make sure it’s taken care of check out the nonprofit group InclineFriends.org.

This story was produced by Logan McCrary and Monica Gouty.
If you have an idea for a future 360° Perspective email 360@koaa.com.