COLORADO SPRINGS – Immunization rates for school kids in Colorado have been consistently low compared to other states for years. The CDC reports Colorado is 49th in the nation when it comes to vaccinating kindergartners.

Part of the reason is more parents are exercising their state right to exempt children due to personal, medical or religious reasons. Colorado currently follows national guidelines that include the objective of having 95 percent of all kindergartners fully immunized by 2020, but right now the state falls well short.

Lawmakers are moving to increase rates. In this 360° Perspective we’re taking a look at statistics and reasoning used by the state to push for change. 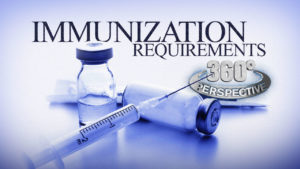 First, some background for you. Immunizations have not always been closely tracked in Colorado.

A bill signed into law in 2014 by Governor Hickenlooper began to change the process. It required the State Board of Health to enact rules that require schools and most childcare centers to report immunization information, including exemption rates, and it has to be shared publicly.

This 2014 law came about in part due to a pertussis, or whooping cough, outbreak in Colorado and the state determining unvaccinated children were 20 to 30 percent more likely to get and then spread the disease.

Here’s a look at why state and national health leaders and lawmakers say they’re pushing to raise vaccination rates:

Our state has also seen multiple cases of measles recently as part of the outbreak that’s affecting 22 states.

The Centers for Disease Control also cites a lack of major outbreaks in certain diseases as a scientifically-backed reason to require and encourage vaccinations for all school-aged children.

For example: In 1921, more than 15,000 Americans died from diphtheria. That’s a bacterial infection that leads to breathing trouble, heart failure, paralysis and in many cases death. After that outbreak since the wide use of the DTap vaccine, or similar variations, there have been just two cases reported in two decades.

In 1964 and 1965 there was an epidemic of Rubella, or German Measles. It infected more than 12 million Americans. 2,000 babies died and there were 11,000 miscarriages. Again, the CDC cites the widespread use of the MMR vaccine which became available in the 1970’s as a reason for a similar outbreak not happening. Since that vaccine was put into circulation the CDC says there have been just 15 cases of German Measles reported since 2012.

Here’s a look at the vaccine rates that have been reported and tracked by the state of Colorado: 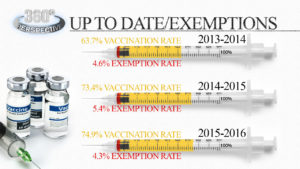 To be clear, these numbers do not add up to 100 percent of all Colorado school kids.

That’s because there’s a margin of about 20 percent of students considered “non-compliant” who were either in process of vaccinations, did not have all required vaccinations, or had not claimed any exemptions.

It’s important to add: Not all parents are opposed to greater immunization restrictions solely due to the vaccines themselves and the debated health effects versus benefits.

Many see this as a “parental rights” issue and are opposed to the state making any of their medical decisions.

It’s also important to note that the 2014 law passed in Colorado as well as the current bill being considered do not require parents to vaccinate their kids. But, the current legislation would make it more difficult for parents to exempt their kids because it would require more steps, effort and formality.

It is still being considered with just over a week to go in the legislative session. We’ll continue tracking it for you.

We’d love to hear your feedback on this story or the pending legislation. We’re also happy to hear your ideas for any other stories or issues you’d like us to give the 360 treatment. Email us anytime 360@koaa.com.

This report was produced by Monica Gouty.