COLORADO SPRINGS  –  Colorado lawmakers are working to expand services offering driver’s licenses to undocumented immigrants. They want to open more offices and use more resources to provide the service. It’s what didn’t make it in the bill that is concerning some voters.

We’re giving you a closer look in this 360° Perspective. 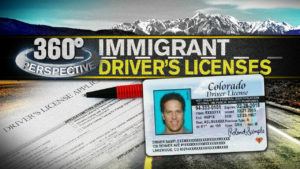 12 states and D.C. allow immigrants who can’t prove their legal status to obtain driver’s licenses in some form. The Colorado “Road and Community Safety Act” took effect in 2014. It authorized driver’s licenses, permits and ID cards for both documented and undocumented immigrants.

Four offices were allowed to offer the in person services in Lakewood, Grand Junction, Colorado Springs and most recently Aurora.

To get a license to drive the driver must pass the same driver’s test and obtain the required amount of permit driving hours, but the licenses aren’t the same as American citizen licenses. They are not recognized at the federal level and have a black label that reads “not valid for federal ID, voting or public benefit purposes.” They can’t be used to board flights, enter military bases or to register to vote.

The new bill expands the services from four DMV locations to more than ten by July 2020. The state says there is an additional fee to get the licenses so that the program can be self-supported.

The republican house minority leader introduced an amendment to the bill to allow voters to petition for a referendum before the law goes into effect and take it to a vote. Democrats struck that down and the language in the law says it is necessary for public health and safety.

The bill awaits the governor’s signature.

Do you have an idea of issue you think needs a 360° Perspective? Email 360@koaa.com