COLORADO SPRINGS – Division is growing in Colorado. Two months since Governor Jared Polis took office there’s a movement, including in Pueblo County, to recall him from office.

The movement is over legislation Governor Polis has endorsed, including red flag laws concerning gun ownership and his decision to sign the National Popular Vote Interstate Compact bill into law.

In this 360° Perspective we’re taking a look at recall elections, how they work and what they can cost you. 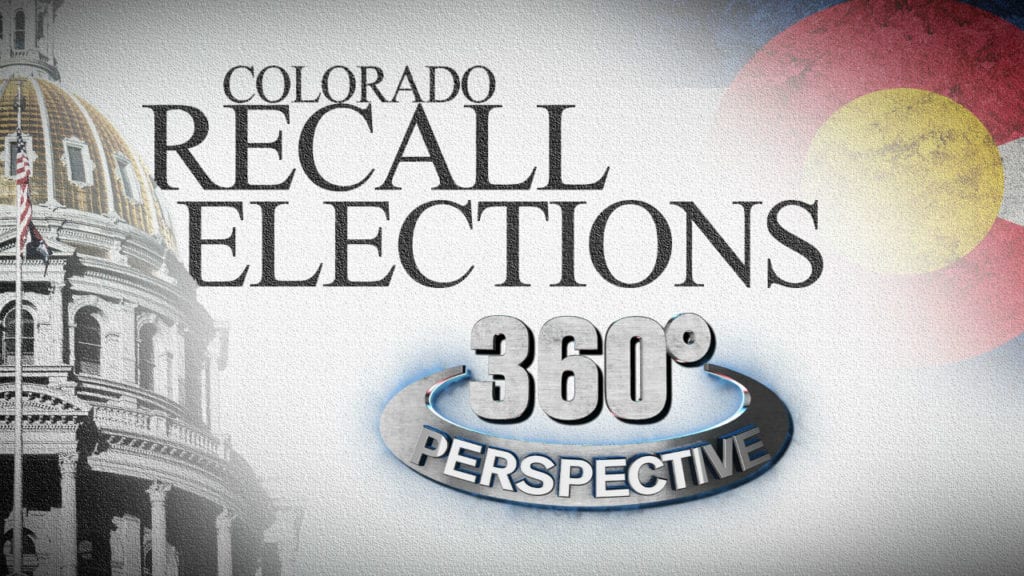 In Colorado, it’s been done before, most recently in 2013 when Democratic State Senators Angela Giron from Pueblo and John Morse from Colorado Springs were successfully recalled after they voted to pass strict new gun control laws.

Here’s how the recall process works: For Colorado’s recall elections at the state and county level, an office holder must be in office for six months before a petition can be circulated or filed. This does not apply to members of the general assembly, who can be the subject of a recall petition beginning on the 5th day the general assembly convenes.

Petitioners have 60 days to collect enough verifiable signatures. For state and county offices, the required number of signatures is a quarter of all votes cast in the last election for the office in question. School district offices  require 40% of all votes cast, and for other non-partisan offices the policy calls for “the lesser of 300 signatures or signatures from 40% of the eligible electors in the district once the petition is approved for circulation.”

For a potential recall of Governor Jared Polis, opponents would need to gather 631,000 valid signatures, that’s the 25% threshold of the 2.5 million votes cast in November.  The signatures can only be certified by the Secretary of State’s Office.

First, in the case of a recall petition against Governor Polis, the Secretary of State must approve of the petition language, which must be 200 words or less and state the grounds on which the recall is sought. It cannot include “profane or false statements,” according to Colorado law.

Only an ‘eligible elector’ may sign the petition. That’s someone who is a Colorado resident, a U.S. citizen, and at least 18-years-old.  The person must be able to vote if a recall election is held.

Secondly, once the petition circulators have gathered signatures from eligible electors, they must be verified to ensure each signer is registered to vote using the address provided on the petition.

If there are not enough certified signatures the petitioners have an additional 15 days to collect more signatures or address any other identified issues before resubmitting.

At this point, if everything looks good with the petition and signatures, those supporting it are not done overcoming any obstacles to get on the ballot. Any eligible elector has 15 days after the petition is certified to file a protest.

We should note that under Colorado law, the proponents of a petition may only amend it once. Also, anyone who signed the petition can request in writing to have their name removed, within 3 days of the petition filing.

If the recall effort moves forward it is now up to the ‘designated election official’ (Secretary of State or county) to set a date for the election that is no sooner than 30 days and no later than 60 days from the date the petition was deemed sufficient.

So, the recall issue makes it to the ballot. How will it look to voters?  They’ll have two questions. The first will include the petition language to the effect of “shall (elected official) be recalled from office…” While the second question will list qualified candidates to succeed the person in office if the recall is successful.  For a recall issue to succeed in an election, it only needs a majority of votes.

These special elections do not come free. In most cases, voters are on the hook for the costs associated with staffing, ballot printing and everything else involved.

We’ll track the progress for you as well as all the legislation moving through the statehouse.

If you have thoughts on this story or have an issue you’d like us to look at with a 360° Perspective email 360@koaa.com.