COLORADO SPRINGS – On Monday, a Death Penalty Repeal bill was introduced in the State Senate.
There has been movement in recent years to end the death penalty in Colorado. Cases are essentially on hold indefinitely after Governor Hickenlooper moved to halt executions in his time in office. Governor Polis says he’ll take a similar stance.

As this develops we are giving you a closer look at capital punishment in Colorado and the USA in our 360° Perspective. 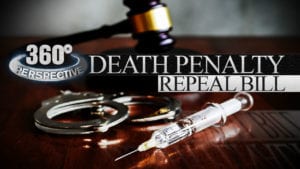 SB19-182 would repeal the death penalty in Colorado for offenses charged on or after July 1, 2019.
In the language of the bill, it says the death penalty is a failed public policy. Lawmakers want it replaced with a sentence of life in prison without parole.

Here are some of the reasons in the bill’s text:
-The risk the state could take an innocent life.
-The national debate that has more states moving away from death as punishment.
-Studies that show death is not a crime deterrent.
-The death penalty unfairly impacts minority and low-income populations.
-Life in prison is more cost effective.

According to the Death Penalty Information Center (DPIC) there are 30 states with the death penalty and 20 without. 3 states, including Colorado, have a governor-imposed moratorium.

Currently, on death row, the NAACP Legal Defense Fund and DPIC say 42 percent of inmates are black and 42 percent are white, 13 percent are Hispanic.

In his term, former Governor John Hickenlooper gave an indefinite stay of execution to Nathan Dunlap. He’s on death row for killing four people at a Chuck E Cheese in Aurora in 1993.
In recent high profile murder cases, the death penalty was not granted, including for Aurora theater shooter James Holmes. Chris Watts is serving life in prison for killing his pregnant wife and two little girls.

Colorado has had one execution since 1976- that was more than 20 years ago.

There are three men on Colorado’s death row right now, including Dunlap, and this is personal for democratic Senator Rhonda Fields. Her son and his fiance were killed in 2005 by the other two.
She has said the bill’s sponsors have had no conversations with victims like her. She wants to know why the rush and says voter’s and victim’s voices should matter.

District Attorney George Brauchler has also said it should go to the people. He said in no state have voters ever repealed the death penalty.

Governor Polis has said he would sign a death penalty repeal bill and would consider commuting the sentences of those currently on death row.

This bill was assigned to the Senate Judiciary Committee where it will be discussed on Wednesday.

If you have a story you would like covered in our 360° Perspective send an email to 360@koaa.com.