COLORADO SPRINGS – We are getting a lot of feedback from you over the National Popular Vote bill. Governor Jared Polis is expected to sign it into law.

Many of you asked us for a refresher on why we have the Electoral College, thinking many voters may not understand why it’s in place, so we’re diving in for you in this 360° Perspective. 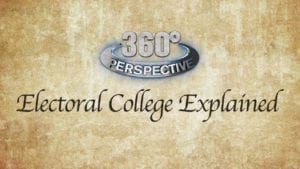 The Electoral College was established by the Founding Fathers in Article II of the Constitution, then replaced with the 12th Amendment.

Electoral Votes are determined by the number of your state’s congressional leaders and two senators. Colorado has 9. In total, there are 538 in the United States. A presidential candidate needs 270 to win.

That’s the magic number of votes the National Popular Vote Interstate Compact wants to get to trigger the win for whoever wins the national popular vote.

Out of 45 Presidents, only five were elected without winning the popular vote. Three in the 1800s, and two in recent history- George W. Bush and Donald Trump.

The Electoral College was created for two reasons according to History Central online.

First, to create a buffer between the population and the selection of a President. The Founding Fathers feared a tyrant could manipulate public opinion and come to power.

Second, to promote fairness from a regional perspective. To give some extra power to smaller states that might otherwise be overshadowed. Otherwise, the concern, that the very populated states like California, New York or Florida, could overwhelm the Popular Vote and campaigns and leaders could neglect other parts of the country.

This map shows the election along state party lines.

This next map is broken down by county. It’s almost entirely red, except for highly populated areas that are mostly blue like LA and New York City.
Of course, there are red and blue voters in every county but this map shows the majority.

Now, this next map shows what the states would look like if it was based on Popular Vote. You can see California and the Eastern seaboard grow much larger in size, while the so-called flyover states get smaller. Newman said there is actually more red overall on this map, but again on both sides, there are votes for the other parties as well.

According to the Congressional Research Service when it comes to legality- opponents argue the interstate compact changes the Electoral College, which would require Congressional Amendments.

National Popular Vote Inc. said it wouldn’t be necessary because it concerns the appointment of Electors, which falls in state constitutional authority.

We will continue to track this for you on a state and national level.

We know there are opinions on both sides of this, you can always reach out to your legislator and Governor Polis with your opinions if you want them heard.

If you have an idea that needs the 360° Perspective please email 360@KOAA.com.