TAOS, NM – Two men are in critical condition at New Mexico hospitals after they were rescued from an avalanche Thursday afternoon. Taos Emergency Services says both victims are men in their early 30s.

Rescuers say both men were found buried in the snow, unresponsive and not breathing. Paramedics were able to establish stabilize both men.

According to the Taos News, rescuers pulled two men from the snow just before 1 p.m. and performed CPR on them. One was taken by ambulance to Holy Cross Hospital. A helicopter flew the other many to University of New Mexico Hospital in Albuquerque.

According to a statement, the in-bounds avalanche happened around 11:30 Thursday morning on the K3 chute off Kachina Peak at Taos Ski Valley. Kachina Peak is the highest point at the ski resort. 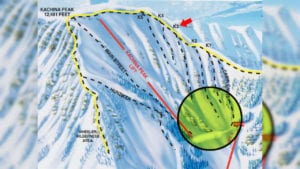 Area affected by avalanche at Taos Ski Valley Resort. The area in green is where rescuers searched on Thursday. Courtesy the Taos News.Ski patrol and witnesses quickly responded to pull the two buried skiers, and continued the search in case there were other victims.

Two skiers have been rescued after an avalanche Thursday at Taos Valley Ski Resort in New Mexico. According to the Taos News, rescuers are continuing to search in case anyone else is buried in the snow.