TELLER COUNTY – It’s been a free and fresh source of water in Teller County, for those that have known about it, for more than 50 years.

After pushing back a November deadline, the Colorado Division of Water Resources is now waiting until April to cap the Gillette Flats Spring. The agency said it wanted to give time to those that depend on the spring for water, which is located on Highway 67, between Divide and Cripple Creek, at mile marker 57.

At a public meeting Tuesday night, Assistant Division Engineer Bill Tyner outlined why his agency plans to cap the spring, but he also shared insight on how citizens could prevent it from happening. 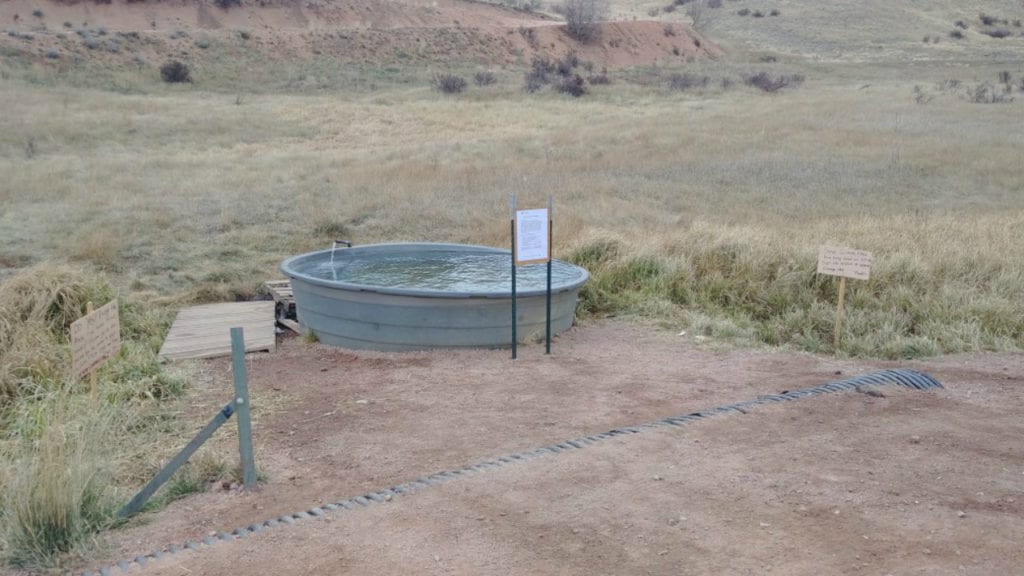 First, Tyner said the water tank and spring flow into the Arkansas River basin. The basin, like the state of Colorado, is experiencing drought.

“The Arkansas Basin is one of the largest geographic basins in the state, but has the slimmest water supply,” Tyner said.

Ultimately, it comes down to state law.

People that have senior water rights have the for the water (being in the basin) over those that either obtained rights at a later date or do not have a decree from the state water court.

“We don’t have enough water in the basin to meet all of those demands for water,” Tyner said.

Tyner said the Division of Water Resources investigated the spring for two years. Over that time, the agency could not find water rights.

To keep the water tank and spring flowing, Tyner said he tried working with local governments, like Teller County, to obtain the decree for that water. They reportedly declined.

Capping the water could mean big changes for the dozens of people that rely on the spring for water, like Laura Williams.

Williams said her family has a well, but she worries for those that do not.

“”I know there’s a lot of the families that don’t have wells and I have to advocate for them, because a lot of them, they may not even have electricity,” Williams said.

In the meeting, Tyner compared the cost of digging a new well to buying a new car. He said average cost estimates range between $20,000 and $30,000.

Unsure of what’s next, Williams and several of the other attendees Tuesday said they’re upset this is even happening to a commodity that, at one point, wasn’t as popular as it is now.

But in a lengthy question and answer session, Tyner said there is still a way to prevent the capping from happening.

For Williams, developing that plan is now the priority to help keep the spring that many now see as a local staple.

“It’s a sense of community. Not only do the local residents use it, the visitors use it whenever they’re coming back and forth through the pass. Animals use it. It’s just kind of like a free-for-all,” she said.

Tyner said evidence of an augmentation plan, done either by government officials or private citizens, would help in delaying the capping or preventing it altogether.