DOUGLAS COUNTY – The Turkey Track 8 Fire brought a familiar feeling for those living nearby.

It’s just across Highway 67 from where the Rainbow Fire reignited only a couple weeks back.

“So scary. We just looked out the window and could see orange flames up on the ridge, and a lot of smoke, and we immediately called 911,” Voth said. 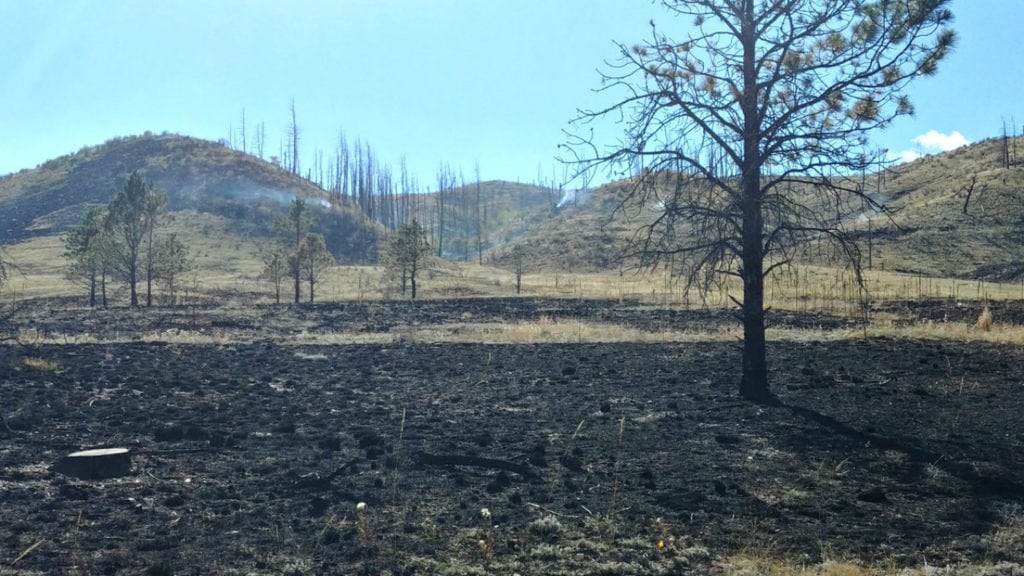 They struggled to get answers regarding the Rainbow Fire, but this time around was different. Firefighters and other emergency personnel were already on scene as she was calling in what would later be named the Turkey Track 8 Fire on Saturday.

It was a big relief, she said.

“This experience has been so much better,” Voth said. “I have actually slept at night, even though we can smell the smoke, because I know they’re on it. And I know what they’re doing and why they’re doing it.”

Firefighters are familiar with the shooting area. This is the 8th fire at the range just this year.

This time, though, firefighters are taking an indirect attack approach focused on safety.

“The plan was immediately made to go ahead and black line in some key areas around us, and burn those off, and then burn off the interior when conditions became favorable,” said Gregg Goodland, public information officer for the Turkey Track 8 Fire.

Being a range, the threat of unexploded ordinance exists, meaning firefighters can’t get as close to the flames as they’d like to.

The area is also homes to hundreds of dead trees, called snags, that were weakened by the Hayman Fire in 2002.

“To have firefighters working in there to secure these areas that are burning is really kind of the worst possible option for us,” Goodland said.

That’s why they’re letting it burn — consuming fuels that don’t need to be sitting and waiting to burn in the next fire.

And this time around, they’re keeping the public aware every step of the way.

“We’re going to watch this thing as closely as we need to to make sure that it stays in these containment lines that we’ve established, and we’re starting to get more comfortable with,” Goodland said. “We’re not going away.”