Dozens of animals found dead, some beheaded on property in Texas

14 animals were found slain on a property in the Georgetown area of Williamson County Texas last week.

The sheriff’s office said it is investigating the horrific crime that includes dogs, cats, chickens, rooster, peacocks and ducks. According to NBC affiliate KXAN, 53 animals were found on a property in the 600 block of Private Road 941 Tuesday.

WilCo SO investigating multiple deceased (Preliminary reports have over 50) animals in GT area. Included are dogs ,cats, chickens, roosters, and ducks. Some reported to being beheaded. More information to be released in morning as it becomes available. pic.twitter.com/k2OUkq6b7y

The NBC affiliate reports 14 of those animals were found dead, some beheaded. "Four dogs and two cats were found decomposing inside the house in locked crates, the rest were deceased chickens and ducks in the backyard," according to a release obtained by KXAN. 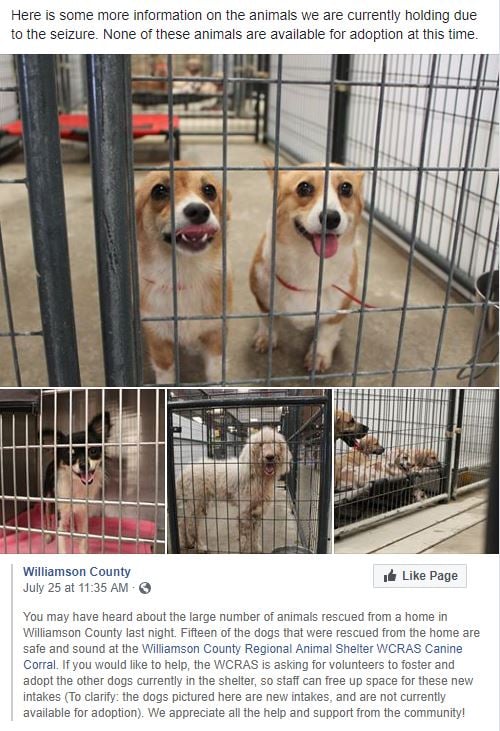 The animals included 15 dogs, 3 cats, 2 cockatiels, 1 parakeet, roosters, chickens and a peahen with her eggs.  By the end of day Wednesday, 8 dogs and cats had been adopted, with 11 going to foster homes, according to KXAN.

The sheriff’s office said no arrests have yet been made, but 15 counts of animal cruelty non-livestock will be filed soon.