A new law signed by Governor John Hickenlooper last month has increased penalties for criminal suspects convicted of stealing guns. House Bill 1077 was co-sponsored by Rep. Larry Liston, R-Colorado Springs, and Rep. Donald Valdez, D-La Jara. It was drafted in response to a rash of smash and grab burglaries at gun stores.

Stealing firearms is now a Class 3 felony meaning judges can fine offenders up to $750,000 and sentence them to anywhere from 4 to 12 years in prison. 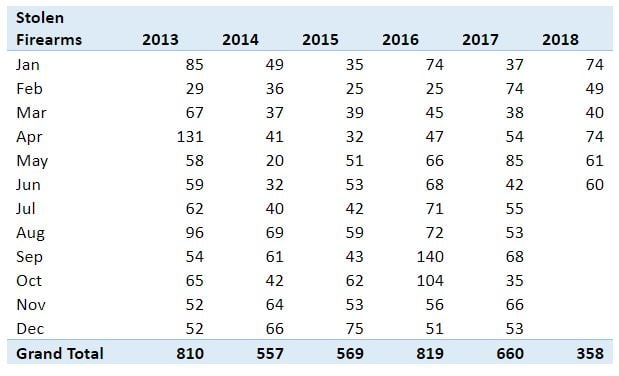 According to data collected by the Colorado Springs Police Department, there have been 358 gun thefts in the first 6 months of 2018. That is the highest number of thefts reported since 2013 during the comparable six month period. However, there were similar numbers of cases reported in 2016 (325) and 2017 (330) at this point in the year.

The worst year of the last five for gun thefts was 2016 when 819 firearms were reported stolen.