Monsoon season is arriving: What does that mean for you?

What exactly is a monsoon?
A monsoon is a seasonal large scale pattern that brings thunderstorms. Basically, it’s just a wind change that brings lots of summer time rain to the four corners region. In Colorado, monsoon season usually starts in July and lasts through August.

How does it work?
During the summer, the United States gets very hot. This is especially true for the west and Midwest where heat really builds up in July.This will cause a ridge pattern in the jet stream and high pressure to set up near the four corners region.

Under this ridge we develop a high pressure system. We also develop a thermal low pressure system from the huge heat that builds over the desert southwest. High pressure winds spin clockwise where low pressure winds spin counter clockwise. These systems work together to bring southerly winds into the four corners region. Moisture from the Pacific Ocean, Sierra Madre mountains and both the Gulfs of California and Mexico is then moved north right into Arizona, New Mexico and Colorado.

It’s not exact, but typically we start seeing thunderstorms develop in the mountains around the middle of the day. These storms then often grow larger and move over southern Colorado through the mid afternoon, dumping heavy rain as they go. By nighttime, the storms are gone and we’re left with a cool and dry evening.

How does this affect me?
It’s a nice mix of good and bad news for anyone living in southern Colorado. The good news is, monsoon season (July and August) usually bring the biggest rains of the year to Colorado Springs and Pueblo. This helps to combat fire danger by keeping the forests and lower elevations watered and healthy. The heavier seasonal rainfall will help to fill the mountain reservoirs which in turn keeps the rivers running at a higher level.

This chart shows average rainfall each month in Colorado Springs. We see a peak in July when monsoon season begins. 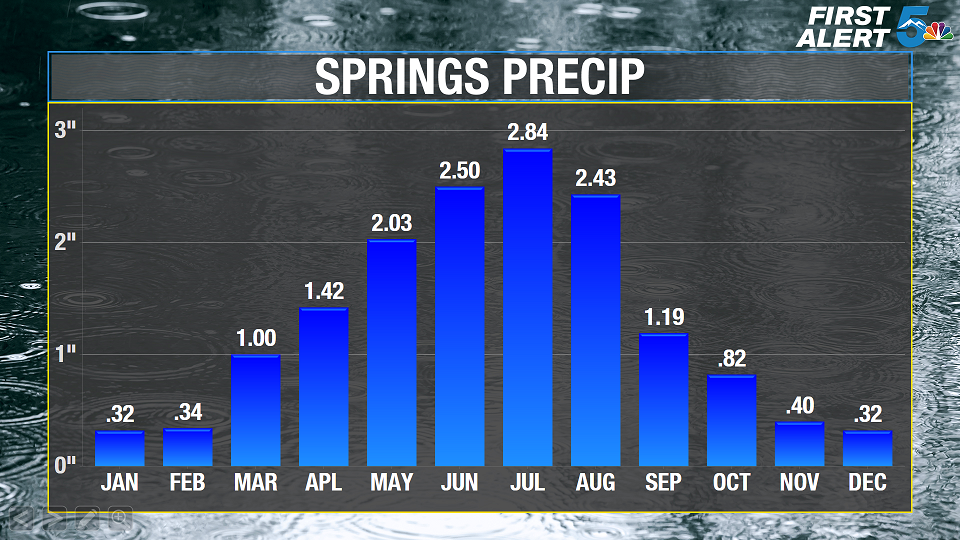