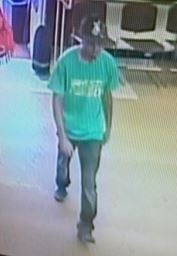 Pueblo Police officers are searching for a suspect who reportedly robbed a King Soopers Sunday morning.

Officers responded to robbery reports at the north side King Soopers at 102 W. 29th Street just before 11 a.m. Police said a man walked into the store and approached an employee at the customer service counter with a note demanding money.

The employee complied and the suspect fled the scene with an unknown amount of cash.

Police said the suspect ran southbound through the parking lot toward a brickyard. No weapon was seen, but the suspect kept one hand under the counter during the incident.

He is described as 5’6", with a "scruffy face", thin build, wearing a teal t-shirt, black cap, sunglasses and blue jeans. Anyone with information or the identity of the suspect is asked to call Pueblo Crime Stoppers at (719) 542-7867.