State law requires all children under the age of 8 to be fastened in a safety seat.

Last year in Colorado, more than 400 children and adults were killed in traffic accidents and more than half were not buckled.

In an effort to raise awareness, the popular ride-sharing service “Lyft” recently partnered with the Colorado Department of Transportation to launch a seat belt safety campaign, but News 5 Investigates found the company and main competitor “Uber” fall short of their safety commitment.

With the help of News 5 morning anchor Brie Groves and her 1-year-old son, Maverick, we went undercover to see whether Uber and Lyft drivers are following safety seat laws in Colorado.

We requested two rides from Lyft and two from Uber. The Lyft driver who arrived for our first test ride instantly failed.

Chief Investigative Reporter Eric Ross asked the driver, “Is it okay if we don’t have a car seat?”

“Technically, no,” the driver said. “How far are we going?”

“Okay, we can do that,” the driver said.

Ross asked, “Are you sure?”

We ultimately declined to allow the driver to take us anywhere without a car seat.

In Colorado, children under 1 must be in a rear-facing safety seat. State Patrol encourages parents to keep their children rear-facing until they are at least two and weigh more than 20 lbs.

“We encourage parents to keep their children rear-facing for as long as possible,” Master Trooper Maurice Harris said.

Children under 4 should remain in a front-facing safety seat. Between 4 and 7 years old, the child should be placed in a booster seat. 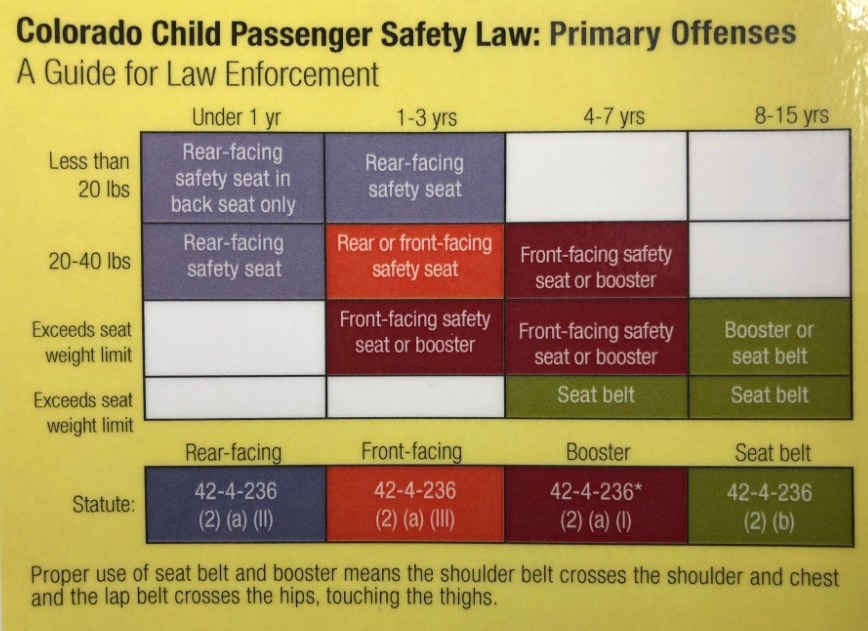 Ross asked the driver, “Is it okay if we don’t have a car seat? We’re going to Wal Mart.”

What we captured on video is far different than this seat belt safety campaign CDOT and Lyft launched in March.

“An unbuckled person increases your risk of being seriously hurt or worse in a car crash by 40-percent,” the promotional service announcement said.

The numbers are even higher for children.

According to Drive Smart Colorado, 55-percent of children who died in car crashes between 2006 and 2010 were not properly restrained.

The National Highway Traffic Safety Administration says child safety seats have been shown to reduce fatal injuries by 71-percent for infants and 54-percent for toddlers. However, over and over again we found drivers for ride-sharing services willing to look the other way.

Ross asked, “If we don’t have a car seat is that okay? We’re going to Target.”

Since all of our rides took place in Colorado Springs city limits, we wanted to share our video with CSPD and talk about child safety seat laws.

Surprisingly, the department would not explain the law and refused an on-camera interview.

Other law enforcement agencies including CSP, Fountain police and the El Paso County Sheriff’s Office were all willing and able to talk about child safety seat laws.

If you get caught without a car seat in Colorado, you could face an $82 fine.

“Not only can the parent get in trouble, but the driver of that company can get in trouble as well because the driver is responsible for everyone in that vehicle,” Officer Eric Moore with the Fountain Police Department said.

News 5 Investigates found the $82 penalty is rather “weak” compared to other states.

For example, in California, failing to properly restrain a child in a car seat carries a $475 fine. In Texas, you could face up to a $250 fine.

Back here in Colorado, state troopers have little sympathy for drivers who break the law.

“We do not give warnings,” Trooper Harris said. “If we see that you are not wearing a seat belt or you are not properly restrained in the car, we are going to issue a ticket for that.”

The goal of a ticket is not just to raise awareness, but hopefully save lives.

“If there is an accident especially at higher speeds and if the children or even the adult passengers are not properly restrained, typically there are worse injuries as a result of that,” Deputy Thomas Conaway with the El Paso County Sheriff’s Office said.

On our fourth and final test ride, News 5 finally got a driver who wasn’t willing to risk anyone’s safety.

The driver immediately asked, “Are all three of you coming?”

“I need a car seat to be able to take him,” the driver said.

He would be the only driver to pass our test.

“Some Uber and Lyft drivers will take you without checking on that and then you’ll be somewhere and then if you don’t have a car seat with you, a lot of drivers won’t bring you back because they can’t let them in. It’s against the law for us to do it. People will sometimes do it, but I just need him to be safe in my car.”

The driver who declined our ride without a car seat was with Lyft.

As far as the other Lyft driver and two Uber drivers who were willing to break child safety seat laws, News 5 reached out to both ride-share companies for comment.

Uber did not respond to our request, but we do know this topic has become so problematic that in Arizona, Uber recently sent notifications to all of its drivers reminding them of safety seat laws.

Lyft sent us the following statement:

Per Lyft’s policy, passengers are welcome to bring children in the car provided they have the proper car seats that fit legal requirements in their state and city. Safety is our top priority and young children should not be traveling in any vehicle – a taxi, rideshare service, or personal car – without the proper safety equipment. Drivers should know that they have our full support declining a ride for passengers who do not follow Lyft’s safety policies, and their decision to do so will not impact their rating. We ask that anyone concerned about a specific incident contact our Critical Response Line immediately so we can take the appropriate action.

Both Uber and Lyft have started rolling out a new option where passengers can request rides with car seats already on board for an extra $10 fee. While that service is available in other states, it is not available in Colorado right now.

If you have a child safety seat, is it installed properly?

According to Drive Smart Colorado and CSP, 90-percent of parents who use child safety seats have them installed incorrectly. CSP, Pueblo police, the El Paso County Sheriff’s Office and Fountain police say you can contact their agency for assistance with properly installing a safety seat. If the agency does not have a certified safety seat instructor available, we’re told they will be able to assist you with finding another agency or organization who can help.

You can also visit Drive Smart Colorado or CDOT’s website for more resources.