Facebook users are filling their pages with one main question Tuesday-Why is the social media app asking if people’s posts contain "hate speech?"

Reportedly, it was a mistake. We’ve reached out to Facebook, but as of this post, they have not confirmed that.

Users were given the option of clicking YES or NO and it seems to be rattling more than one user right now. Here’s an example..and I’m not sure, but those onions look a little aggressive don’t you think? 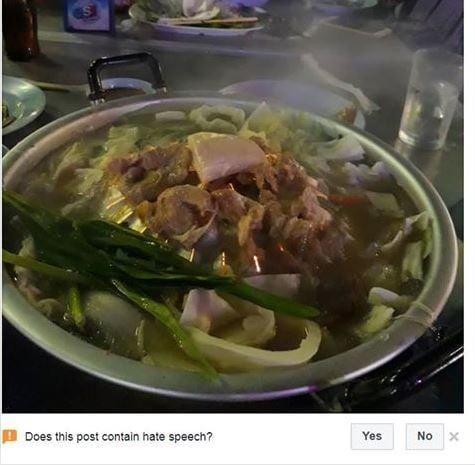 When users clicked on the “Yes” button, they were prompted to “Give Feedback on This Post.” Yet the feedback options weren’t quite clear — only stating “Hate Speech,” “Test P1,” “Test P2,” and “Test P3.”   Facebook explained that they are using the feedback to help them “learn when something’s not right.

Users took to Twitter with snarky comments about the survey.

So… Facebook now has a little button on EVERY SINGLE POST that asks people if it’s hate speech, and there’s no way this could possibly go wrong ¯_(?)_/¯

Sooo the brilliant folks over @facebook decided to roll this shit out today – a new "troll button" on EVERY SINGLE POST. Black folks prepare to be reported with significantly higher frequency. pic.twitter.com/qwiCpqNEgY

Hrm. I’m sure this prompt that now shows up underneath every post in my Facebook feed won’t be abused. pic.twitter.com/vQmSp2ynUi