Monument Police Officers are searching for a suspect accused of taking pictures of a woman in a dressing room at a local store.

Officers said the incident happened on April 13 around noon at the Walmart store at 16218 Jackson Creek Parkway. The unknown suspect is accused of sliding his cell phone underneath the dressing room door and snapping pictures of a victim while she was changing.

He is described as a white or mixed-race man, 18-22 years old, thin build, with brown hair in a pony tail, and was wearing a hoodie and blue jeans. Police said the suspect fled the scene in a red, two door car, possibly a late 90’s Lexus.

If you have any information regarding the suspect or car in the photos, please call the Monument Police Department at (719) 481-3253. 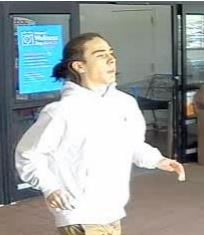