HOUSTON (AP) – The Latest on the death of former first lady Barbara Bush (all times local):

Former President Bush and daughter, Dorothy, greeted well-wishers who visited the church to pay their respects to Barbara Bush today, because President Bush wanted to show respect to them for coming, aides say. pic.twitter.com/LCCx4ab2x6

Former President George H.W. Bush is greeting mourners as they pay their respects and walk past the casket of his wife of 73 years.

The nation’s 41st president was seated in a chair a few feet away from the rose-covered casket Friday at St. Martin’s Episcopal Church in Houston. He and his wife, Barbara, had long worshipped at the church.

The 93-year-old former president shook hands and accepted condolences from well-wishers for about 15 minutes inside the nation’s largest Episcopal church.

Officials say about 1,600 people had paid their respects in about the first hour of public viewing. People attending the service are going through security checks before boarding shuttle buses to travel a few miles to the church.

The funeral will be held Saturday in Texas. KOAA News 5 will carry NBC News special live coverage of the event online at KOAA.com and within the News 5 App. 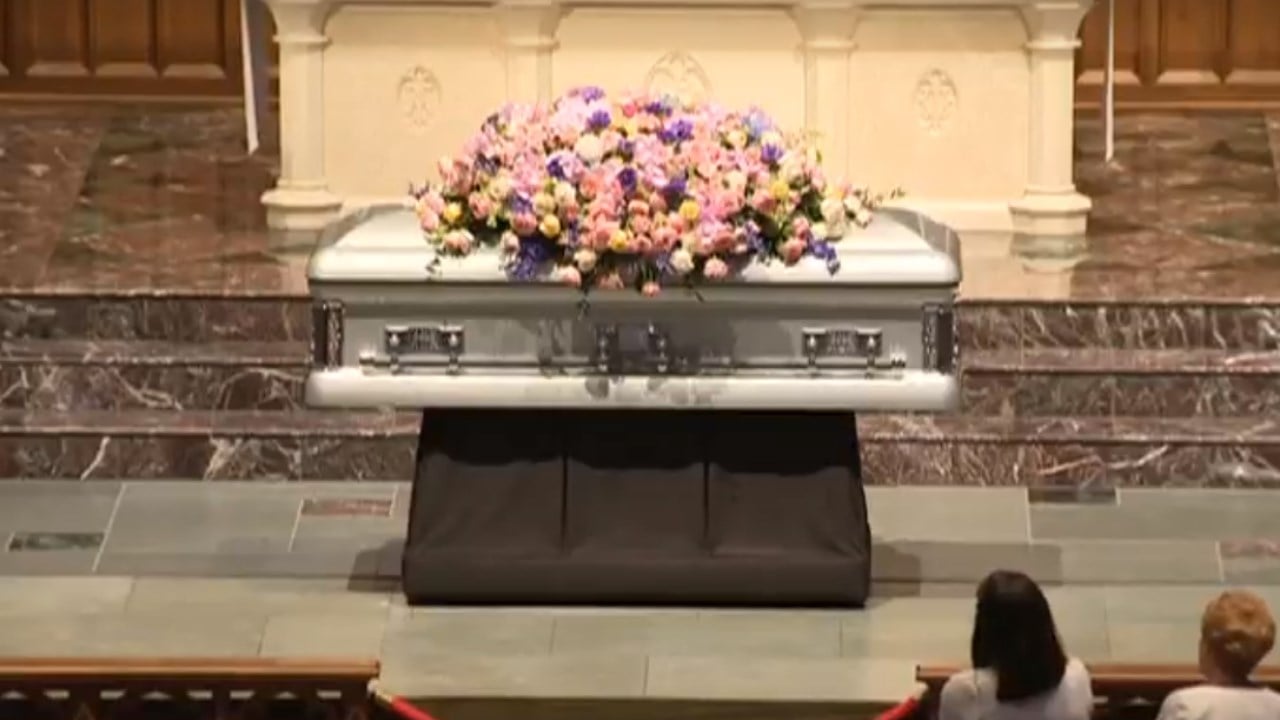 Hundreds of mourners are filing past the rose-covered casket of former first lady Barbara Bush.

People are commending Bush’s dedication to literacy and education as they pay their final respects Friday during a public viewing at St. Martin’s Episcopal Church in Houston.

She and her husband, former President George H.W. Bush, had long have worshipped at the church, where mourners lined up hours ahead of the public event.

The planned 12-hour viewing has drawn a steady stream of people who passed through security checks and then boarded buses outside another church a short distance away. They included teachers and social workers commending Bush’s dedication to education, along with federal politicians.

The silver casket is in the sanctuary behind a velvet rope in the nation’s largest Episcopal church.

Senate Majority Whip John Cornyn and his wife are among those paying their respects to former first lady Barbara Bush.

The Republican senator from Texas was among those with early access to the Houston church where a public viewing is being held Friday. Barbara Bush died Tuesday at age 92. She and her husband, former President George H.W. Bush, were longtime members of the church.

Cornyn was followed later into St. Martin’s Episcopal Church by Housing and Urban Development Secretary Ben Carson, before hundreds of mourners were beginning to arrive on buses from a staging area a few miles away.

Her funeral is Saturday at the church.

A couple from Washington, D.C., says they decided to come to events celebrating the life of former first lady Barbara Bush to honor her work in education and helping people with disabilities.

Mitchell and Jessica Queener say they were in Houston for work but decided to join scores of people lining up Friday to pay their final respects to Barbara Bush, who died Tuesday at age 92. Her body will lie in repose from noon to midnight on Friday at St. Martin’s Episcopal Church in Houston.

Jessica Queener works in special education and wears a cochlear implant to help her with her hearing loss. She says Barbara Bush’s work "really resonates with me on a personal level but also professionally."

They also credited Barbara Bush for being a positive influence on her husband, former President George H.W. Bush, when he signed the Americans with Disabilities Act in 1990.

Jessica Queener says the federal law "brought me a lot more access to the world that I did not have as a very young child."

The governor signed the bill this week, shortly after the death of the former first lady. The plate will be available later this year, and $10 for every new plate sold and every renewal will benefit the hospital.

The plate is expected to raise more than $200,000 annually for the state’s only children’s hospital.

The Kennebunkport community is hosting a memorial for Barbara Bush on Sunday. Bush and her husband, former President George H.W. Bush, spent years at their summer home in the town.

More than 100 people are already standing in line to pay their final respects to former first lady Barbara Bush.

Among them is 74-year-old Lucy Orlando, who traveled from Florida. Originally from Haiti, Orlando says she has admired Barbara Bush for years, especially for her work promoting literacy.

Forty-nine-year-old Varney Johnson also commended the former first lady’s work in supporting literacy efforts. The social worker is originally from Liberia and says he also wanted to thank Mrs. Bush for her son George W. Bush’s work during his presidency to support his home country.

Mrs. Bush died on Tuesday at age 92. A public viewing is scheduled to start at noon Friday at St. Martin’s Episcopal Church in Houston, where she and her husband, former President George H.W. Bush, regularly attended services.

People attending the public viewing will go through security checks before boarding shuttle buses to travel a few miles to the church.

A spray of flowers covers the closed silver casket of former first lady Barbara Bush in the sanctuary of the Houston church where mourners are waiting to pay their final respects.

A hearse containing the former first lady’s casket arrived at the nation’s largest Episcopal church before daybreak. Her body will lie in repose from noon to midnight.

An invitation-only funeral is set for Saturday. She’ll be buried later in the day behind her husband’s presidential library at Texas A&M University. The gated plot is in an area surrounded by trees and near a creek where the couple’s 3-year-old daughter, Robin, is buried. She died of leukemia in 1953.

As the outpouring of tributes continues for Barbara Bush, the general public can pay its respects to the former first lady at a viewing.

Bush’s body will lie in repose from noon to midnight Friday at St. Martin’s Episcopal Church at 717 Sage Road in Houston, the nation’s largest Episcopal church. The public must go to the Second Baptist Church at 6400 Woodway Drive to park and pass through security. The parking lots can be entered from Voss Road.

Metro is providing shuttles to and from St. Martin’s. The parking lot at Second Baptist will open at 10 a.m., and shuttles will start running at 11:30 a.m.

A by-invitation-only funeral is scheduled for Saturday at St. Martin’s.

Bush died Tuesday at her Houston home. She was 92.