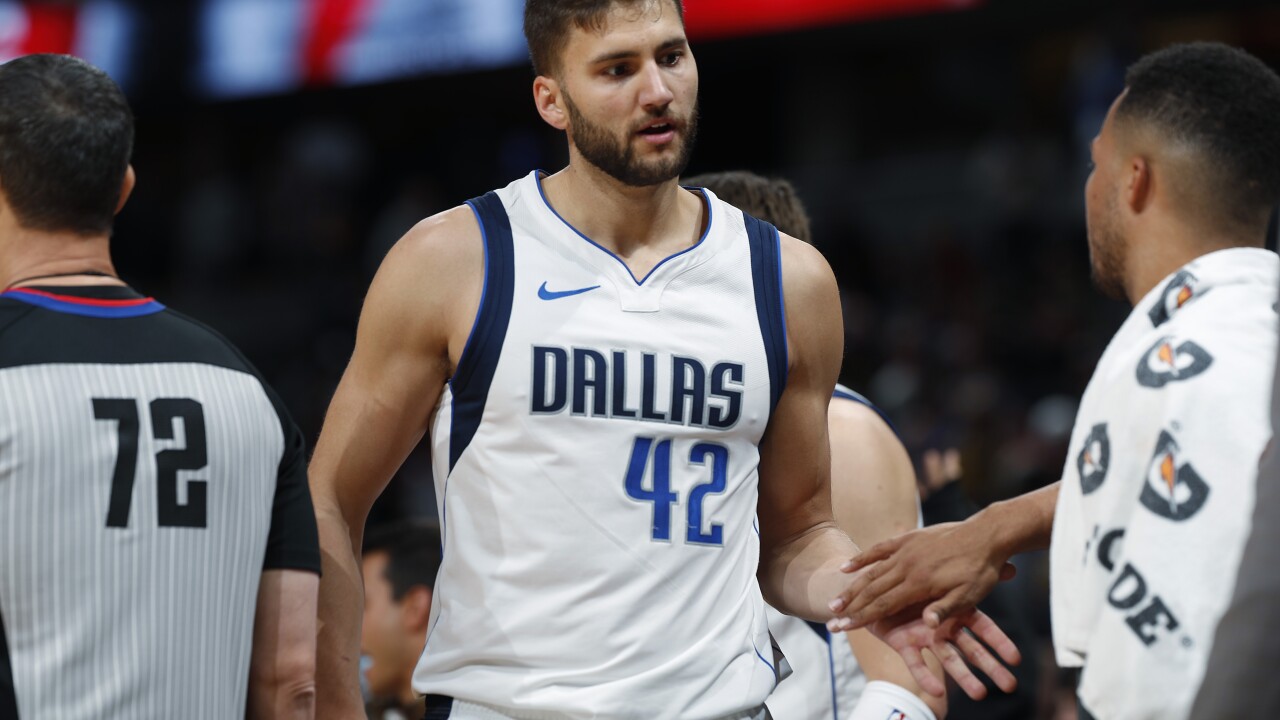 David Zalubowski/AP
Dallas Mavericks forward Maxi Kleber is congratulated by teammates as time runs out in the second half of an NBA basketball game against the Denver Nuggets, Tuesday, Oct. 29, 2019, in Denver. The Mavericks won 109-106. (AP Photo/David Zalubowski)

DENVER (AP) — With their superstars held in check, the Dallas Mavericks relied on their supporting cast. They put on quite a show and helped hand Denver its first loss of the season.

Maxi Kleber had 14 points, seven rebounds and a key block late, and Dallas overcame off nights from Kristaps Porzingis and Luka Doncic to beat the Nuggets 109-106 on Tuesday night.

Dallas had nine players score double figures, tying a franchise record, on a night their two top scorers combined for 22 points on 7 of 26 shooting. Doncic scored 12 points and Kristaps Porzingis had 10 points and 14 rebounds. No Mavericks player scored more than 14 points.

"It demonstrates the importance of having a deep roster," Dallas coach Rick Carlisle said. "Denver is very deep. We're deep and we're going to use our guys."

Doncic and Porzingis were also cold from deep, missing 12 of 14 from 3-point range. Porzingis was 1 for 8 and Doncic hit 1 of 6 and missed three free throws.

"We did a great job on those guys but the other guys got off," said Gary Harris, who shadowed Doncic most of the game. "We can't allow that to happen. Those guys really hurt us today."

Nikola Jokic had his second triple-double of the season, with 10 points, 10 rebounds and 10 assists, and Paul Millsap had a season-high 23 points and eight rebounds. Will Barton scored 19 but it wasn't enough to prevent Denver from losing the second game of a back-to-back set.

"We couldn't get stops when we needed. Too many layups, too many broken assignments," Millsap said. "We just weren't disciplined enough."

The Mavericks rallied from 11 down in the third quarter on the strength of their support players. They did most of their damage after Denver took a nine-point lead late in the third quarter. Tim Hardaway Jr., who finished with 14 points, hit three 3-pointers and Dorian Finney-Smith two during a 30-10 run that gave Dallas a 103-94 lead midway through the fourth quarter.

The Nuggets chipped away at the lead and got within 107-106 on Harris' 3-pointer and appeared to take the lead with 1:05 left when Kleber was called for goaltending on Jamal Murray's layup.

The officials quickly reviewed the play and overturned the call, keeping Dallas ahead 107-106.

"It's an automatic trigger; any goaltending in the last two minutes that's called is automatically reviewed," Carlisle said. "It was pretty clear from my vantage point that it was going to be overturned."

Doncic hit a driving layup and Jokic lost the ball out of bounds with 29.2 seconds left. After Doncic missed two free throws Murray, who had 16 points, was hounded by Finney-Smith and missed everything on his 3-point attempt with 3.8 seconds left.

"I knew he was looking for a 3 so if he was going to get a shot off I just wanted it to be contested," Finney-Smith said.

Mavericks: Doncic took a shot to the side midway through the first quarter when he collided with Gary Harris going or a loose ball. He was bent over before a timeout but stayed in the game. ... C Dwight Powell made his season debut after missing the first three games with a left hamstring strain. He finished with four points in 13:34 of action.

Nuggets: Millsap's previous season high was 11. He had that many in the first 3:34 of the game. ... Denver was 12-1 in the second of back-to-back games last season.

Kleber finished with three blocks and one steal to go along with his 14 points.

"Kleber catches people by surprise because they don't see him and all of a sudden he's blocking a shot," Carlisle said. "Sometimes it can elicit a whistle that blown by a referee who has never seen something like that before."

Kleber has earned the respect of his teammates.

"He's a great defender," Doncic said. "He can do a lot of things. It wasn't just that play."