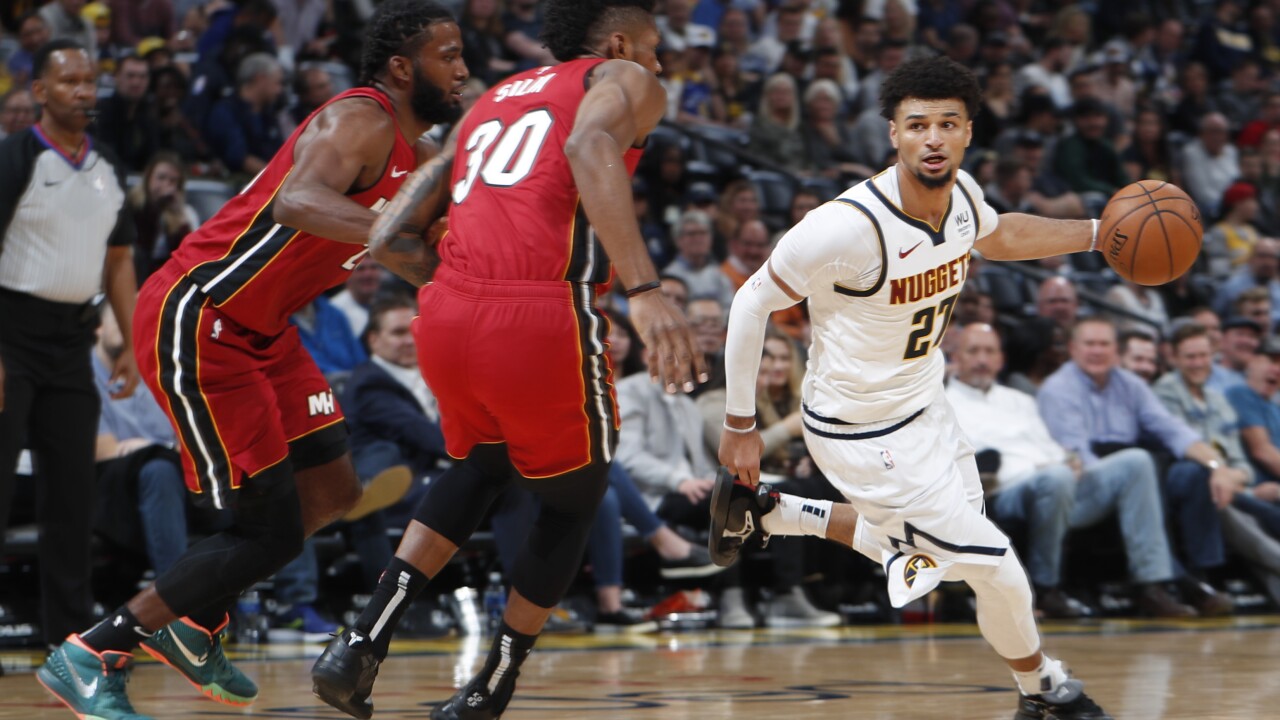 DENVER (AP) — Jamal Murray scored 21 points, Will Barton and Jerami Grant had 15 each, and the Denver Nuggets pulled away in the second half to beat the Miami Heat 109-89 Tuesday night.

Jimmy Butler had 16 points and Kelly Olynyk 13 for Miami, which ended a three-game winning streak. It was the first time this season the Heat had failed to score at least 100 points. The Nuggets held Miami to 36.4 percent shooting from the floor while converting 52.3 percent of their shots.

Up by 10 at haftime, the Nuggets doubled their lead with a strong third quarter in which they outscored the Heat 31-20 despite losing Paul Millsap to a facial laceration early in the period after Gary Harris left near the end of the second quarter with an ankle injury.

Monte Morris converted a three-point play in the final moments of the third, helping the Nuggets take an 89-68 lead into the fourth. Morris finished with 11 points.

Denver scored eight of the next nine points starting the final quarter capped by Torrey Craig's dunk off a lob pass from Nikola Jokic to move in front 97-70 with 8:58 left to play.

Bam Adebayo's driving layup broke the Nuggets' surge but not enough to alter the outcome for the Heat, who had trailed by a point after the first quarter. Denver substituted freely in the final minutes.

The Nuggets closed the last 5:04 of the second quarter on a 16-5 run to take a 58-48 lead at halftime. Barton, back from a toe injury, began the flurry by converting a go-ahead three-point play and also connected on a 3-pointer during the surge.

Heat: F KZ Okpala was sidelined by a left Achilles tendon strain. ... F/G Derrick Jones Jr. is back from a left groin strain that sidelined him the previous four games. ... F/G Justise Winslow returned to action after missing two games with lower back stiffness.

Nuggets: Barton returned to the starting lineup after missing the past two games with a swollen left toe. ... Harris left the game late in the second quarter with a left ankle sprain and was ruled out for the remainder of the contest. ... Millsap suffered a cut on his forehead when he collided during a third-quarter fastbreak with Meyers Leonard, who was called for a flagrant 1 foul. Team trainers stopped the bleeding with a headband bandage and Millsap made both free throws before being replaced on the floor by Grant.

Nuggets: Round out two-game homestand by hosting Philadelphia on Friday night.