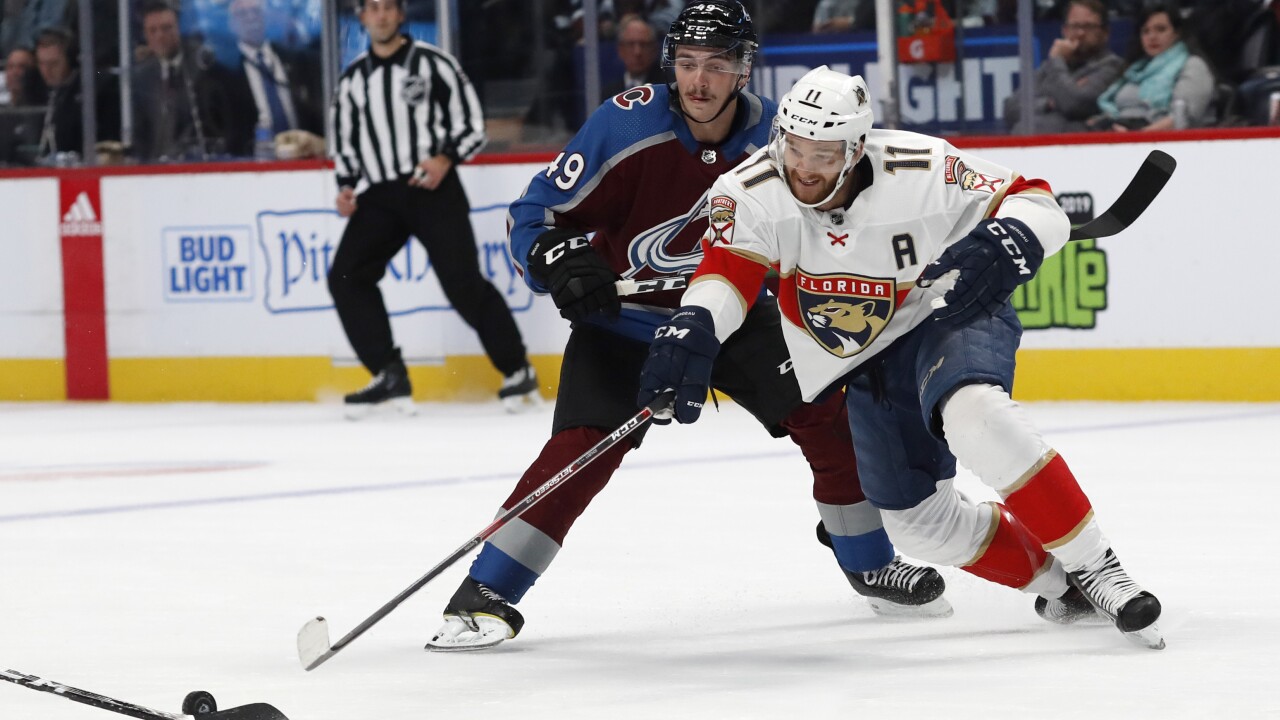 DENVER (AP) — Jonathan Huberdeau scored 29 seconds into overtime after he tied the game late in regulation, and the Florida Panthers rallied from a two-goal deficit to beat the injury-riddled Colorado Avalanche 4-3 on Wednesday night.

Huberdeau sent a backhanded shot between the pads of Avalanche goaltender Philipp Grubauer. He tied the game with 1:30 remaining.

Colton Sceviour and Aleksander Barkov also scored for the Panthers, who went 2-1-1 on a four-game trip. Sergei Bobrovsky stopped 27 shots, including a glove save at the end of the third period.

Matt Nieto and Joonas Donskoi scored first-period goals, and Nathan MacKinnon added another in the third to make it 3-1. The Avs were without two big offensive pieces in Mikko Rantanen and Gabriel Landeskog due to lower-body injuries.

Midway through the third period, Panthers center Jayce Hawryluk was reaching for the puck when he took a big hit from Colorado defenseman Nikita Zadorov that sent him crashing into the boards. Hawryluk got up slowly and retreated to the dressing room. Zadorov later got into a skirmish with Dryden Hunt. After being separated, Zadorov had words with the Florida bench.

MacKinnon had a goal and an assist to give him at least a point in all 12 games this season. He matched Joe Sakic (1988-89) for the fifth-longest point streak to start a season in franchise history. The top mark is held by Mats Sundin, who had at least a point in 30 straight games to begin the 1992-93 season.

The Avalanche got gritty goals in the first period from Nieto and Donskoi. Nieto poked in a puck while falling to the ice, and Donskoi knocked in another one near the net to give Colorado a 2-1 lead.

Things turned a little testy at the end of the second period. Hunt stabbed at a puck after Grubauer grabbed it. Cale Makar didn't like it and shoved Hunt. Then Grubauer pushed Hunt in the helmet. Meanwhile, away from the play, Nazem Kadri and MacKenzie Weegar began fighting. They both drew 5-minute penalties.

Given Colorado's rash of injuries, coach Jared Bednar juggled his lines — all except the third unit. Nieto, Pierre-Edouard Bellemare and Matt Calvert quickly found a connection that Bednar doesn't want to disrupt. The trio combined on Nieto's first goal of the game. They have a combined 21 points.

Grubauer turned in a big save in the first period when a puck deflected off the skate of Avalanche defenseman Mark Barberio and was headed into the net. Grubauer swung his arm around to swat it away.

Makar celebrated his 21st birthday Wednesday but didn't have a point. His nine assists in October were the most in a month for a rookie defenseman in Avalanche history.

NOTES: Barkov scored his first goal of the season. ... Bellemare wore the "A'' as an alternate captain. ... F Jayson Megna made his Avalanche debut after being recalled from the Colorado Eagles of the AHL. ... Colorado F Colin Wilson was scratched with a lower-body injury.