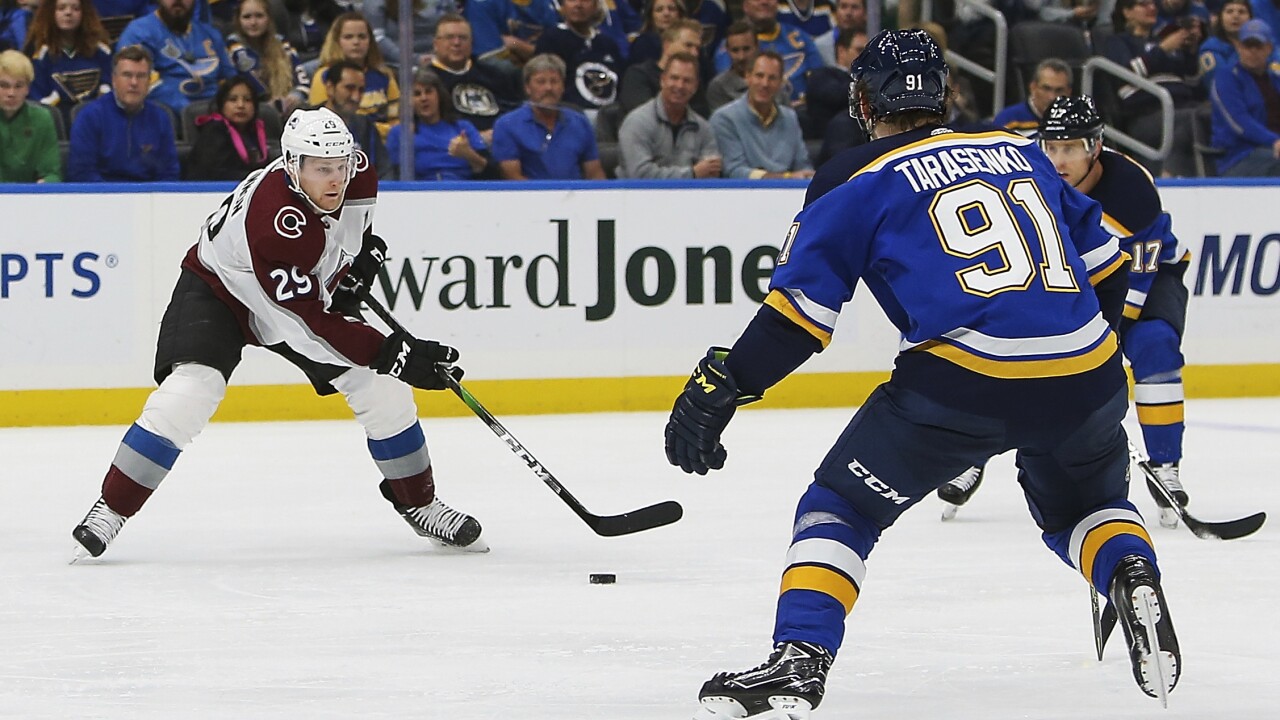 Brayden Schenn and David Perron also scored for the defending Stanley Cup champions, who came in with their longest skid since March 30-April 4, 2018. Jordan Binnington finished with 17 saves.

Nathan MacKinnon scored for Colorado, which was the only team in the NHL without a regulation loss and fell to 7-1-1. Philipp Grubauer stopped 22 shots.

The Blues swept the four-game season series last season and their latest win moved them to 8-1-0 in the last nine home games against Colorado. The Blues are 15-3-0 over the Avalanche at home since April 5, 2011.

St. Louis scored twice in the second period for a 3-1 lead. The Blues outplayed the Avalanche while outshooting them 11-1 in the period.

Perron scored a 6-on-5 goal at 5:07, giving the Blues a 2-1 lead with his fifth of the season. Standing in the slot, Perron one-timed a pass from Tarasenko on a delayed penalty on Andre Burakovsky for kicking the puck like a soccer ball while playing with a broken stick.

Tarasenko scored his third goal of the season with 4:54 left in the period. Jaden Schwartz fed Tarasenko, who was along the right goal line, and his shot trickled between Grubauer's pads for a 3-1 lead. Tarasenko has a five-game points streak.

Schenn scored a power-play goal at 10:07 of the first period for a 1-0 St. Louis lead. Tarasenko dropped the puck to Vince Dunn, who sent a pass across the ice to Schenn. From the top of the circle, Schenn skated into the slot and rifled a shot over the shoulder of Grubauer.

With the goal, MacKinnon has scored at least one point in each of the nine games this season for the second straight season. MacKinnon tied an Avalanche record (John-Michael Liles 2010-11, MacKinnon and Mikko Rantanen in 2018-19) for scoring in nine consecutive games to open two seasons.

NOTES: Colorado RW Mikko Ratanen left the game in the second period with a lower body injury. He did not return. ... St. Louis' Carl Gunnarsson (lower body) remained out of action. He was hurt last Thursday. This was his second missed game. ... Pitcher Michael Wacha and second baseman Kolten Wong of the St. Louis Cardinals were in the stands watching the game. ... The Blues hold a 62-61-18 all-time record against the Avalanche. The teams will play four more times this season. ... Colorado's D Nikita Zadorov played his 300th career NHL game. ... Colorado has played five games in its six-game road trip with a 3-1-1 record.

Avalanche: At Vegas on Friday night to finish a six-game trip.

Blues: Host Los Angeles on Thursday night in the finale of a four-game homestand.