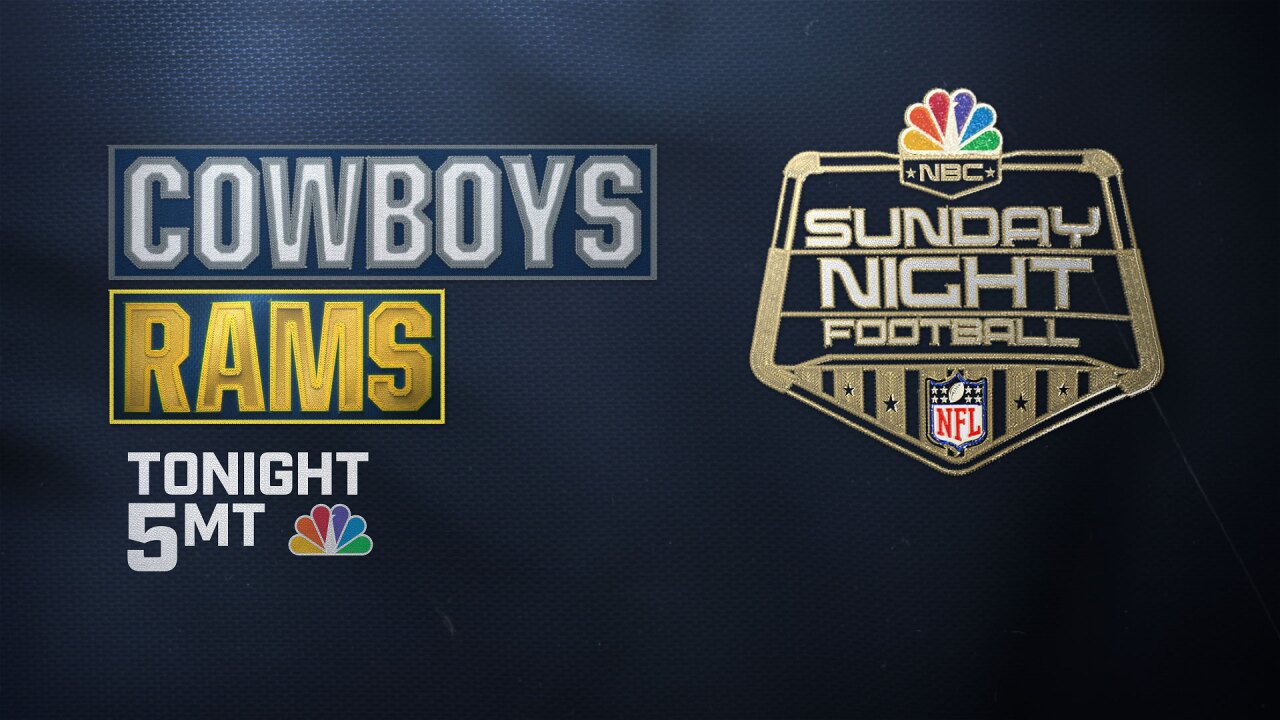 Sunday Night Football is back with a week 1 matchup between the Dallas Cowboys and the Los Angeles Rams. Coverage starts immediately after News5 at 4pm and NBC Nightly News.

As fans gear up for the game, there will be many unique things going on that will make this season different from all others. You'll see shirts, decals on helmets, or patches on team caps, displaying names or phrases to honor victims of racism and/or police brutality.

Fans also won't find mascots, reporters, or cheerleaders on the sidelines, since they aren't allowed due to COVID-19 protocols the league put into place.

Here's the remaining lineup of Sunday Night Football on NBC for this season. Keep in mind, every game after October 11 has the possibility of being changed due to NFL flex scheduling rules, denoted with an asterik.
Read more on NFL flex scheduling procedures

In Denver, a limited number of fans in the stadium to cheer on the Broncos against the Tampa Bay Buccaneers led by quarterback Tom Brady on Monday, September 27.

Gov. Jared Polis announced Tuesday that the Broncos are permitting a limited capacity of 5,700 fans following discussions with the health department and in adhering to local guidelines from the COVID-19 pandemic. Most of the fans allowed at the game will be season ticketholders, officials said, with some half-price seats available.

Seating will be organized in "pods," or small groups, of 1-6 tickets across the stadium, said Brittany Bowlen, the Broncos vice president of strategic initiatives. Sections will be separated into smaller groups with designated entrypoints to the stadium, concessions and restroom areas to limit exposure between fans. Masks will be required for all fans.

Empower Field at Mile High seats 76,125, meaning 5,700 fans represents just under 7.5% of capacity. The safety of fans is top priority, leading to the small number approved. The Broncos sought a three-week ramp up period to prepare, helping explain the timing of Tuesday’s decision.

"This is an important process to move forward on," Polis said, and the state plans to work with the team to possibly allow for more fans in the stadium later in the season.

The Broncos have been working in cooperation with the governor’s office for months. They submitted a 32-page proposal that was approved to open training camp, and Bowlen followed suit with a detailed plan to bring some fans back for a team that has sold out every game since Week 1 of the 1970 season.

Bowlen attended Polis' press conference on Tuesday. The Broncos will determine which fans have the opportunity to attend among the club’s season-ticket holders, and half-price tickets will be offered as well.

"We are not back to normal," Bowlen said. "Empower Field will look and feel different."

Polis said the Broncos' plan would follow state guidance of not allowing groups of more than 175 people to gather, including isolating those groups across the stadium in both seating areas and concessions and restrooms.

Go here for the team's full list of ticketing information, safety protocols and other information for attending the Sept. 27 game.

Even with fans in attendance, teams will be permitted to run pre-recorded crowd noise made available by the NFL, and the Broncos plan to do so. The noise plays on a continuous loop through the PA systems at 70 decibels, starting at kickoff. Those attempting to manipulate the audio volume, higher or lower, are subject to penalties, including loss of draft picks.