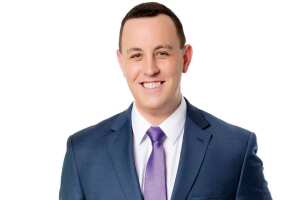 Sam's two most memorable assignments would be helming severe coverage of both the Cheyenne Mountain hail storm back in 2018, as well as the bomb cyclone in March of 2019. Sam specializes in covering severe weather, especially tornadic supercells, as well as large scale winter storms and blizzards.

Sam's weather philosophy is to be as accurate as possible and to give you information about your town you can't find on a weather app. One of the things he works hardest on is delivering snow totals on a more local and accurate scale, despite the wildly varying and unpredictable terrain of southern Colorado.

Sam received a 4-year bachelor's degree in Meteorology at Iowa State University. He was born in northwest Iowa in a town called Fort Dodge but lived on a small farm surrounded by corn outside of the city.

Sam isn't much of a reader but he is a huge movie lover. Some of his favorites would be the Lord of the Rings trilogy, Signs, V for Vendetta, Jurassic Park, Star Wars, Aliens, and many many more.

Sam loves pretty much everything Colorado has to offer! He's a huge fan of skiing with his favorite resorts being Crested Butte, Arapahoe Basin, and Telluride. He's a big fan of hiking, but not the biggest fan of 14ers.