COLORADO SPRINGS- A Colorado Springs man reached out to News 5 Investigates after he was promised a flashy vacation, only to buy a $21,000 stay-cation. Buying timeshares may sound like a great deal, but some customers now wish they could go back in time and invest their money elsewhere. Investigative Reporter Patrick Nelson uncovered the tactics the fraudsters are using to get rich. Millions of dollars are lost in timeshare scams every year and we found many of these companies are getting lazy, using the same business address right here in downtown Colorado Springs.

Rick Paine says 2017 seemed like the right time to invest in a timeshare.

“I really wanted to get my two sons in. And I wanted to help them with their honeymoons,” said Paine. “I’ve got employees and I thought you know, I’ll reward them with a trip to somewhere paid for.”

It’s a decision he now regrets.

“Once we got into this every time you tried to call them and ask, hey how can we use this? They’d say look, for another few thousand dollars for this,” said Paine. “It was constant up-selling”.

Now, $9,000 into the timeshare agreement Rick gets another call from a different company, promising to buy out the original timeshare.

“Give us $12,000 and we’ll get you out of the $9,000 that you were in the other one,” Rick said describing the pitch of the company. “I still remember that 90% of the people that go through this get their money back.”

But Rick got more empty promises and he’s hoping to warn others.

“I was stupid twice it cost me well over $21,000. I’d love to get that money back, but boy I just hate to see these people doing this,” said Paine. “I hate bullies and this is what these people are doing their bullying people.”

The numbers show Rick isn’t alone in losing money to timeshare pitches. According to the Better Business Bureau Travel/Vacation scams were the 2nd riskiest scam in 2018 specifically for men. Men lost on average $3,950 dollars.

“It didn’t take money and then take food off my table, but there’s got to be a lot of people out there that fall for this stuff and they’re going hungry or you know they’re not able to pay the rent,” said Paine.

We addressed Rick’s concerns with the Better Business Bureau of Southern Colorado. They too are hearing about devastating losses.

“One woman was taken for over 100 thousand dollars and she sent a wire and could never get any of it back,” said Paul Myers-Bennett from the Better Business Bureau of Southern Colorado.

It turns out timeshare companies aren’t just targeting people in Colorado Springs, but they are also giving off the illusion they are a part of the city’s downtown business community. At least two timeshare companies who list their address at 102 South Tejon have been investigated by state officials and labeled as fraudulent companies. The fraudsters conducting business out of a virtual office literally in the same building as the chamber of commerce.

“Someone’s found that it works so they will use the same address it does in fact have businesses that are credible in the same address so it’s hard to say not everyone that does business out of a certain address is actually a fraudster,” said Myers-Bennett.

“When a company resurrects a company that was filed with the state in the 90s that makes them look credible. Sometimes you can do a quick search and I’ll see hey this company appears to have been around since 1997. Well, if a business has been around since 1997 it’s probably legitimate. That’s what people think,” said Myers-Bennett. 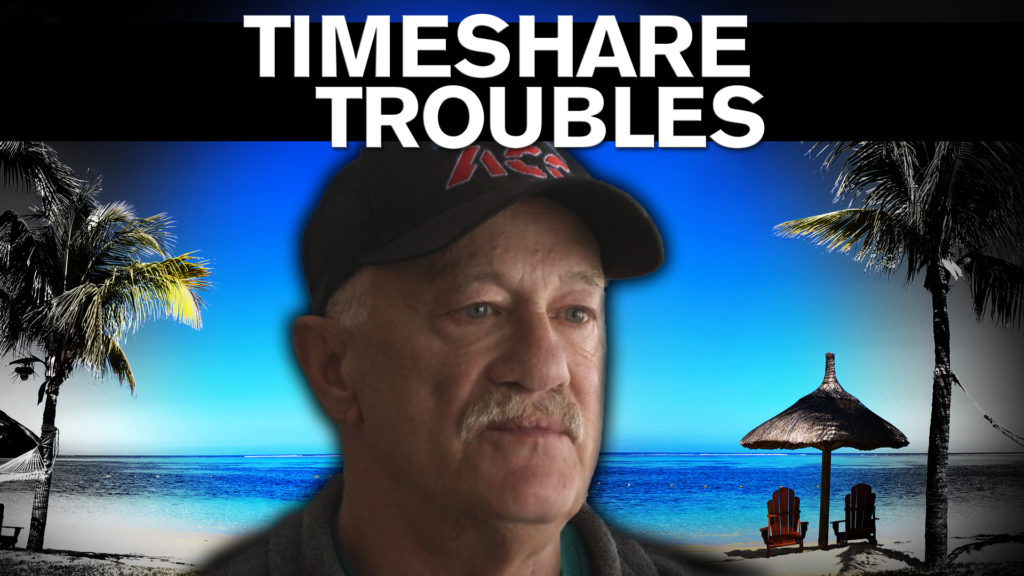 Rick has filed a complaint with the Colorado Attorney General’s Office and the Consumer Fraud Division of the FBI, but so far, nothing. The hope is one day there will be enough evidence to bring charges against the people behind these companies.

“Just knowing that these people that were held accountable I think that is most important thing,” said Paine. “You know there are retired people out there. They’re on fixed incomes and they fall for this stuff that shouldn’t happen in this country.”

If you are contacted by a timeshare resale company the first step you should take is contacting Colorado’s Division of Real Estate to verify the company and its business license are legitimate.

Colorado residents have been fighting these types of scams for years now. In fact, in 2013 state lawmakers passed a law regulating how timeshare companies do business. So the attorney general does have the power to bring charges against companies who are not making good on their promises.