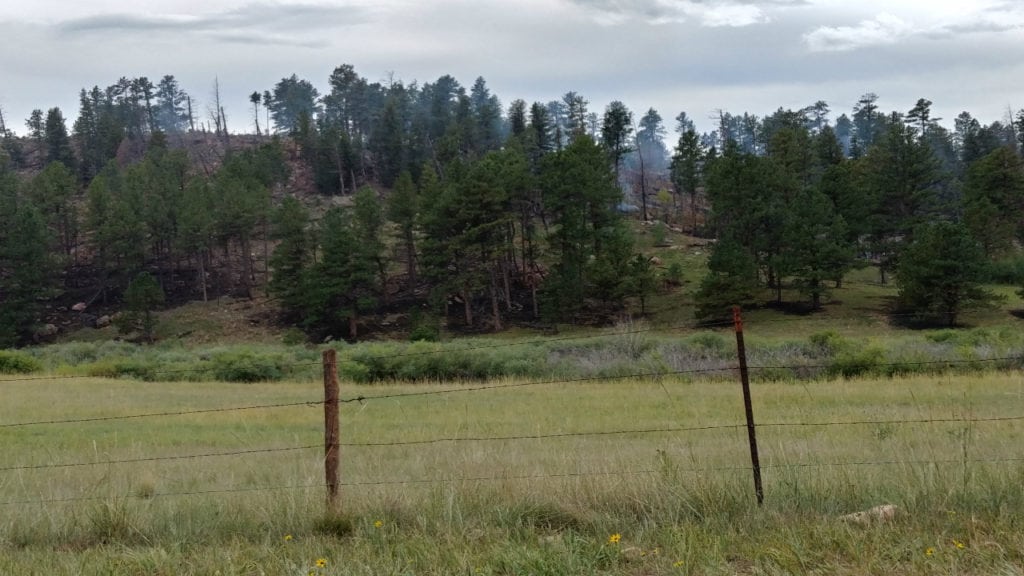 DOUGLAS COUNTY – Hours after a News 5 report, the U.S. Forest Service scaled back containment on the Rainbow Fire burning about 10 miles north of Woodland Park.

The Forest Service said the fire remains at 17 acres, but recent dry conditions caused increased fire activity in the area, which caused estimated containment to drop.

The Forest Service said the fire was caused by lightning on Aug. 5  and they said no structures were at risk. It was declared 100 percent contained on Aug. 18, but 11 days later, that number has changed.

“Fire managers initially decided to drastically reduce the risk to firefighters in this very high hazard environment by utilizing a less common containment strategy,” said Pikes Peak Ranger District Fire Management Officer Eric Zanotto in a news release.  “This strategy lets us construct fire lines in safer locations while allowing the interior fire to continue to burn within the containment lines.” A secondary benefit is realized as fire is reintroduced to the landscape, resulting in a healthier forest.”

That news release also went on to say “firefighters are constantly evaluating fire behavior and are prepared to take necessary actions to carefully manage fire spread.”

Kathryn Voth, a neighbor in the area, said Thursday that high winds and dry conditions caused the fire to put her home within range of embers.

“Smoke billowing up every day for the past three weeks; it’s stressful. We worry,”  Voth said. “Wehn you go to bed at night, you worry are you going to get that reverse 911 call that says you need to evacuate because something has changed.”

Warning signs will remain up along Highway 67 telling drivers that smoke could be visible in the area from the fire.

The Forest Service still says it is 90 percent contained.