We’re going beyond the headlines and political back and forth in our  360° Perspective. 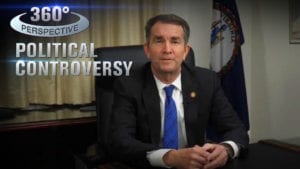 It all started with a racist photo from Northam’s medical school yearbook.
The 1984 yearbook photo from East Virginia Medical School surfaced Friday, Feb. 1. The collage shows a picture of a person in a Ku Klux Klan robe standing next to a man in blackface.

At first, Northam confirmed he was in the photo, but said he was unsure which costume he wore. He deeply apologized in a statement saying, in part,

“This behavior is not keeping with who I am today and the values I have fought for.”

Immediate calls for his resignation came from both sides of the political aisle.

On Saturday he changed his response during a press conference.

“I was appalled they appeared on my page. I believe then and now that I am not either of the people in that photo,” Northam said.

He went on to say he didn’t purchase the yearbook and wasn’t sure what was on his page. He called the photo disgusting, offensive, racist and said it should not have been published.

The Governor also admitted he did at one time darken his skin to dress up as Michael Jackson for a dance contest. He said his memory of that costume was so vivid he knows it wasn’t him in the yearbook photo.

Here’s what we know:

Here’s what we don’t know:

We’ll continue to track developments in this story for you and bring you new information, without the spin, as we get it.