COLORADO SPRINGS – Even in high school, Micah Flick’s football coaches said he had a sense of charisma most high school students just don’t have.

Mason Young was Flick’s coach at Colorado Springs Christian School, overseeing Flick’s growth both as a young man and quarterback. 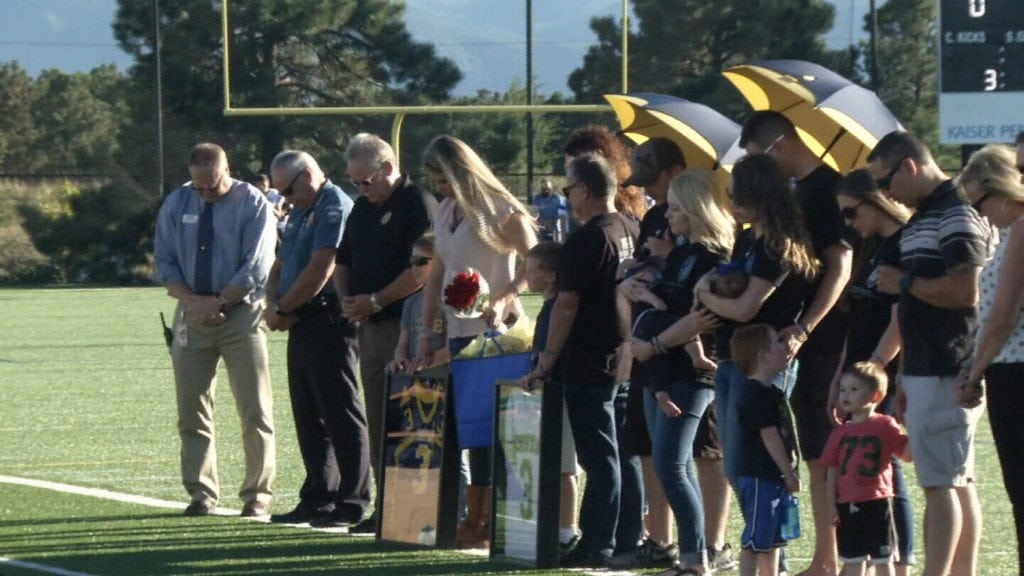 He called out plays, commanded the offense and led the team until his graduation in 2002 — the same qualities he relied on as an El Paso County Sheriff’s Deputy.

So, when the Lions learned of Flick’s death in the line of duty, the CSCS football team knew it had to do something special to honor their former quarterback.

The Lions honored Micah’s life and service by retiring his No. 3 jersey from the program in a ceremony before Thursday’s game against Platte Canyon. In addition, Young put both of Micah’s high school jerseys into shadowboxes for Rachael and Micah’s mother Chenoa — who both knew all about his love for the game.

“He told me many, many stories,” Rachael said. “This was a huge part of growing up for him, and one of his favorite things, and by far his best sport.”

Every helmet worn by a Lions player now also has a No. 3 sticker on the back.

It was a gesture of love and support for one of their own — ensuring the quarterback, sheriff’s deputy and family man will never be forgotten.

“Yeah, I realize that February probably feels like a very long time ago for the community and the public, but we deal with it everyday,” Rachael said.