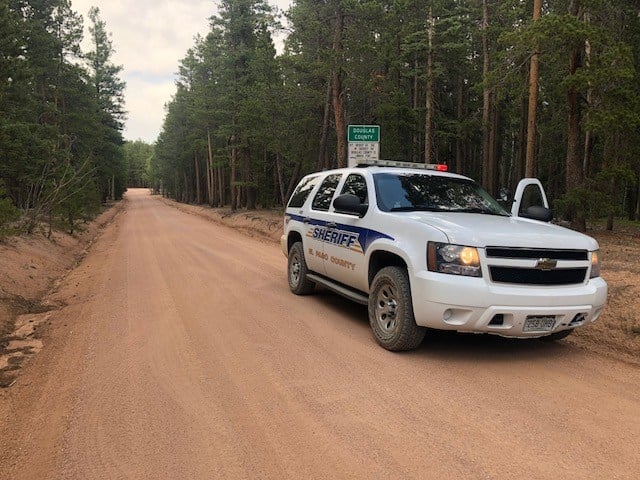 Arrest documents obtained by News 5 said the man who shot an armed carjacking suspect on Rampart Range Road was a retired police officer from Alabama.

Douglas County deputies said Benson stole a blue Mazda hatchback sedan in El Paso County and was driving on three tires north on Rampart Range Road. Deputies interviewed numerous people who said the driver of the Mazda shot at their vehicles. No one was hurt, but one family camping with their grandchildren told deputies they had to duck when the man shot at their truck.

With police and deputies in pursuit, Authorities said Benson drove onto an occupied campsite and began yelling. The camper, 51-year-old Wesley Mattox, approached Benson. Mattox is a retired officer from Russellville, Ala.

Mattox told Douglas County deputies Benson pointed a rifle at him and told him to get him water and that "the law was after him." Mattox then said he returned to his camper, where he armed his wife with a handgun and grabbed an AR-15.

Mattox told deputies he took position behind the Mazda and said he told Benson to drop the gun. According to Mattox, Benson swung the rifle toward him and began shooting at him and the camper while driving away.

Mattox told deputies he thought he was out of ammunition in his rifle, so he retrieved a second AR-15 from his truck and took up position behind a tree behind the Mazda. Armed with the second rifle, he watched the car to see if Benson moved, which he did not.

Neither Mattox or his wife were injured in the exchange.