Your Healthy Family: How do you say, "Thanks for saving my life"? 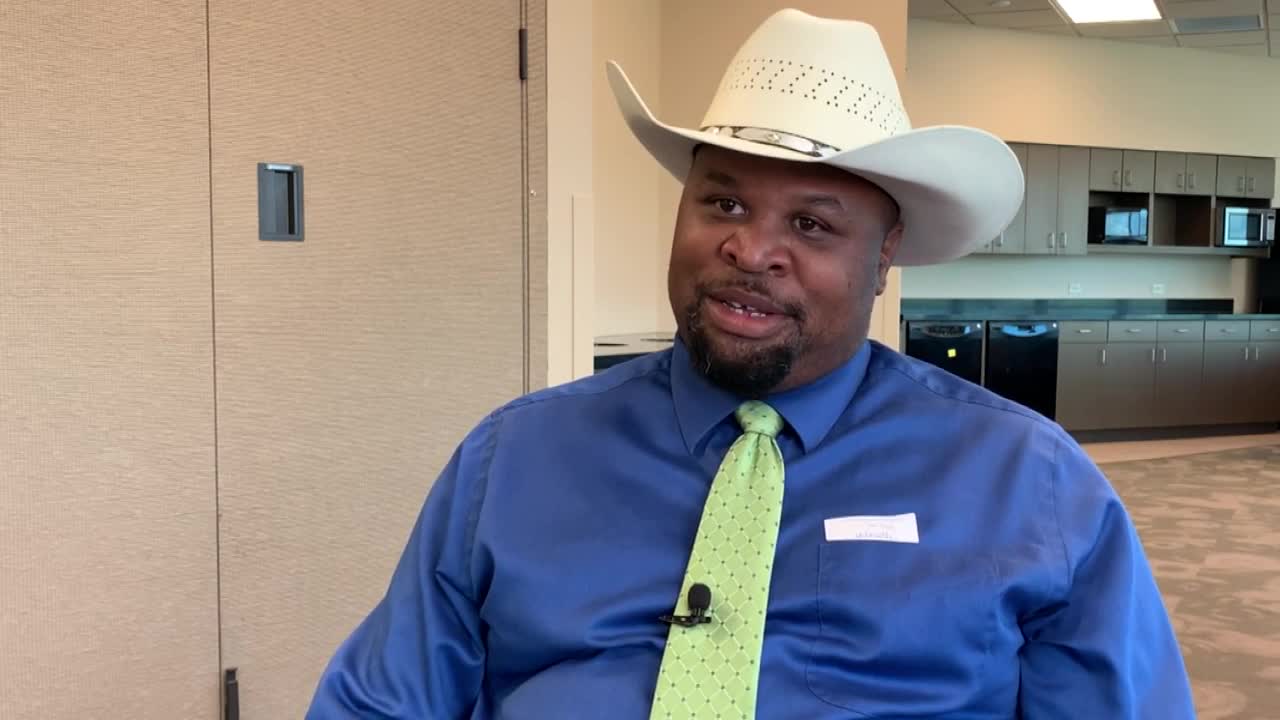 What can you say to a group of people who saved your life? It’s a question Jackie (Jack) V. Anderson thought a lot about ahead of meeting the healthcare workers who took care of him when he suffered a massive stoke.

COLORADO SPRINGS — What can you say to a group of people who saved your life? It’s a question Jackie (Jack) V. Anderson thought a lot about ahead of meeting the healthcare workers who took care of him when he suffered a massive stoke in late August 2020. It was a large-vessel occlusion on the left side of his brain that could have easily left Jack without the ability to talk, walk or feed himself, if he survived at all.

Jack says, “It’s overwhelming to see all these people - and know what they did for me - it’s a lot. I'm thankful and appreciative.”

The reunion happened in late September - just about a month after his stroke - at UCHealth Memorial Central Hospital in a large conference room. Because of the pandemic, everyone was wearing masks. As Jack and his daughter and grandson came into the room, with pastries in hand for everyone, he was greeted with applause from those gathered and grateful to see him in good health.

Jack proceeded to then hug, and say a heart felt thank you - one by one, to each person there. Then Jack asked a question, “Now that everybody is here, I don’t want to offend anyone, but can I pray?”

It was something Jack says - as he is still trying to comprehend the meaning of it all - that he wanted to do for those who all played a role in his care. “I definitely thought about it and I wanted to say a prayer for everybody who saved my life. I could be in a whole different situation right now, completely different or not even here - that’s the part I'm still trying to grasp.”

Hope Lanning is the registered nurse who cared for Jack in the emergency department at UCHealth Memorial Hospital North. Hope says: “We were in a circle, and he prayed over us, it was very endearing and I’m just so happy he has a good outcome.”

Jack’s relatively recent move to Colorado to be with family hasn’t been an easy one. He says, “I wear a cowboy hat but I’m not a cowboy; I'm a country boy from Pennsylvania. I moved all the way out here,” saying he went from two-lane roads to busy Colorado Springs.

Jack says he has some bigger questions after surviving his stroke, “I’m like, of all people, God, what’s my reason of being saved? People die left and right and that's the amazing thing because your time here is not promised.”

He also has a new zest for life with each new day. “I’m going stronger and I have more energy now. Before the stroke I felt like I was weak and run down and now I’m going hard. On my job, I'm pulling line like a champ! Don’t get me wrong I’m worn out at the end of the day, but the whole day I’m going hard where before in the middle of the day I would feel like I’m too old for this.”

Jack also says he has realized his goals and dreams can’t wait. “It (the stroke) did push up my goals. I want to accomplish them a lot faster now. I had a 15-year plan and now it’s moved up.”

Many of the healthcare workers who gladly gathered to meet Jack say that getting to see someone on the other side of such a serious health crisis is something they are grateful for, too.

Justin Myers, who was a part of the Wescott Fire Department's response, says, “I was fortunate to be in the right place at the right time and evaluate and determine that it was most likely a stroke. It’s so cool to see him on the back side; we don’t always get to see the outcomes of our patients. It's the perfect story from start to finish, and he’s (Jack) got plans, and we can't wait to see the future.”

Hope Lanning, the nurse, adds: “To see him walk into that conference room, I’m getting the chills just talking about it. It was an incredible outcome because it was not projected to be that kind of outcome. To see him want to thank the people that were involved in his care was really awesome. For all of us many times we care for patients, and we never know what happens. We say goodbye and we hope that everything goes well. It means a lot to me and everyone (involved) that he would want to meet us.”

Dr. Clint Fouss says having a patient want to meet him in a situation like this is a first. “My first time in 16 years, so it means a lot. The last time I had seen him he was completely paralyzed on his right side and I thought that was going to be for the rest of his life, and he is walking today.”

Mary Gray, who was the flight nurse with UCHealth’s LifeLine on duty that day says, “To see him be completely independent with basically no residual effects from a major life-changing stroke, it’s amazing. I work on the mobile stroke unit as well and I worked in the E.R. for a number of years and his was one of the worst strokes I have seen. It was very high on the stroke scale for such a young person. It's an absolute amazing team effort that came together for a great patient outcome.”

Flight paramedic Matt Bergland adds, “I've spent almost 30 years of my life learning to do this job so that we can help people get back to their normal daily lives. When something like this happens - when we actually see an outcome that is this profoundly good - it's invigorating.”

Dr. Daniel Huddle says, "Jack is the patient we wish every stroke patient ended up like. The system and team worked flawlessly, so you are the benchmark we strive for with every single patient.”

Going forward, Jack will always be tied with each one of these people in some way, the people who were doing their job to help and heal their patients.

Jack is forever grateful and says, “I think more people should be grateful for what people do for you, and thank them and make them feel the gratitude, especially for saving someone's life. They are the amazing part of my story.”

While Jack mentioned previously in this story that the move to Colorado has been a challenging one, it’s fair to say there is no place he would rather be. “That was part of the process for me, being in the right place. My mom says God put everything in place for me to be alive today by putting you in Colorado. Even going to do that Handy job that morning (of the stroke). Everything, everything was perfectly played out like a piano tune for me to be sitting here, talking to you doing this interview right now.”

BE FAST - If you are having trouble with:

Facial drooping
Arm weakness on one side of the body,
Speech, slurred speech
Time to call 9-1-1