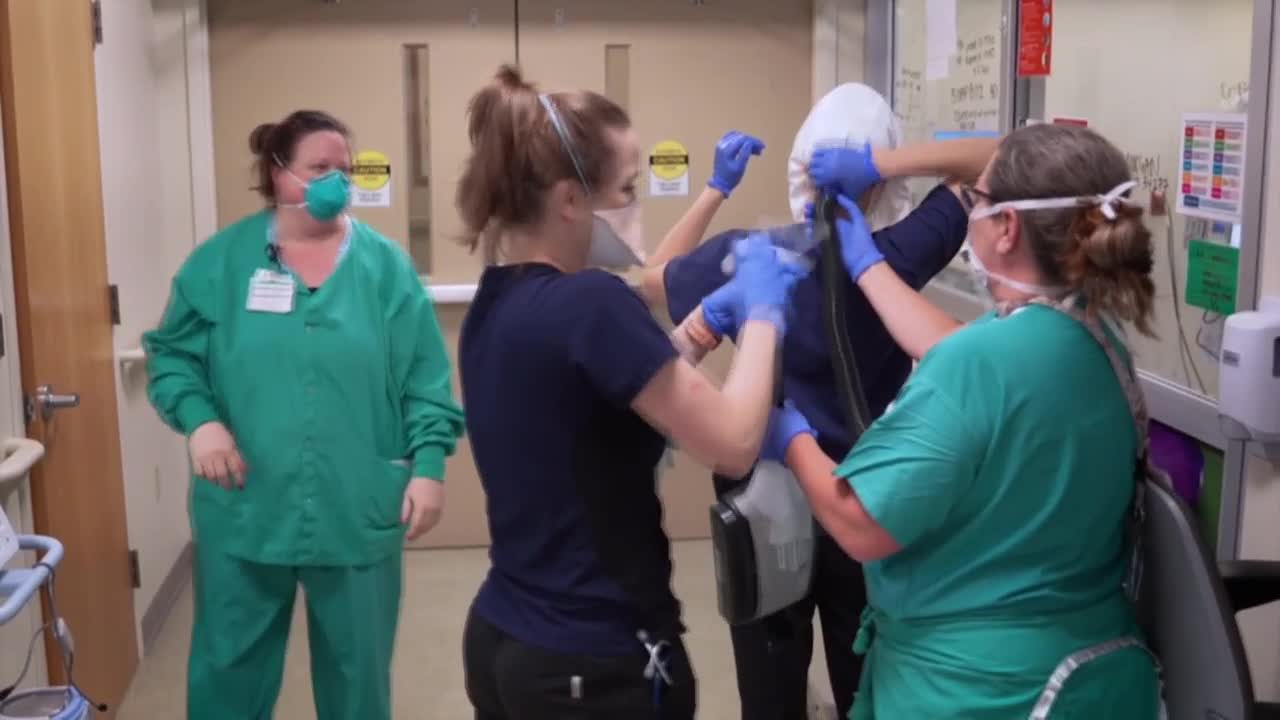 Jim Anders says, “I was pretty good for almost a week. I was a little tired but otherwise didn't really have a lot of symptoms but toward the end of the week, my situation continued to worsen.”

COLORADO SPRINGS — It's important for all of us to understand that until a vaccine or cure is developed for COVID-19, we’re all going to be facing a new reality in many ways. People will still get sick, including those who need to be hospitalized. People will also continue to be treated and recover from this new virus.

That’s something Jim Anders, who is in his 60s, has learned firsthand. Jim and his wife live in Colorado Springs. Jim says he is mostly retired and working toward another achievement: “I am working toward my major goal in life - which is to become a ski bum.”

Jim says he spends between 25 and 30 days a year skiing, which means he is in the high country a lot. Still, he doesn’t know for sure when he was infected with COVID-19. “I have racked my brain to try and figure it out.”

When the request went out in March that anyone who had been in Summit County should self-isolate for two weeks, Jim says he knew it was the right thing to do even though he felt fine. “I was pretty good for almost a week. I was a little tired but otherwise didn't really have a lot of symptoms. Toward the end of the week both my wife and daughter showed signs of COVID-19 and I did as well. They fortunately seemed to get through it very very quickly, within a couple days, but my situation continued to worsen.”

It didn’t take much convincing from his wife and son-in-law, who is a nurse, for Jim to go to the emergency room at UCHealth Memorial Central on the night of March 28th. He says it wasn’t a typical visit to the ER. “You walk in the door and you're greeted by people in masks and gloves, so it's a little unsettling. You walk in wondering what's wrong with you, and you don’t know what can be done.”

He learned that despite the fact that he didn’t feel like he was having trouble breathing, his oxygen level was low. Jim was tested for COVID-19 and had to say goodbye to his wife as he was admitted. He knew he needed care, but was also aware that the hospital was a very busy place to be.

Jim says he also became aware that his caregivers – his nurses and others - were putting themselves at risk. “I realized that there was probably a lot of stress in their life. Wondering, ‘Am I going to get it, is my family going to get it?’ I thanked them for being there, and they would almost immediately turn that right back around, and say to me, ‘We're here because this is what we chose to do as a profession, to help people. What can we do to make you more comfortable?’”

Jim didn’t become sick enough to have to go on a ventilator. He thinks his many days of skiing at high altitude may have had something to do with that. He also is very aware that the doctors and nurses that cared for him also cared for patients who were in far worse shape than he was, and some even lost their battle with the virus. “It's got to be tough for them to see, but I would also remind them that there's some success stories out there and I'm happy to be one of those.”

Being in the hospital without having visitors was another challenge. “It was kind of lonely. I had my cell phone so I was able to call my family and text some friends. I got some really great jokes from my friends while I was in the hospital trying to keep my spirits up. I would get down a little bit for a moment or two. I would think about my family and what was going to happen to me. But in general I was able to keep a really positive attitude through it. My wife kept saying to me - don't worry God’s got this.”

Jim’s stay in the hospital lasted five days, and then he was able to reunite with his wife. He is feeling much better and hopes we can all do our part to make these challenging times a little better. “Follow the self -quarantine guidelines, and follow the six-foot rule. Only go out for what you need. When you're young in life an incident like this that lasts a couple months seems like a good portion of your life. When you get to my age, an incident that lasts a couple months is a lot smaller percentage of your life - if you want to look at it that way. Follow the recommendations, you’re not invincible and anybody can get this.”

Jim says he is grateful to be spending time with his wife, and in new ways with his kids and grandchildren. The family spent Easter on a Zoom call.

As we wait for a vaccine or treatment for COVID-19, Jim hopes that we can learn something from his experience. “I would tell you that if you need to go to the hospital, follow the guidelines and talk to your physician first - if you can. But if you go to the emergency room, know that you'll be taken care of. Don't be afraid of that.”